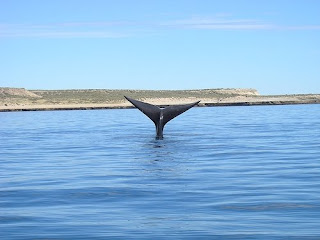 Because I was out of town for most of last week it took me a while to catch up on my reading. Via this article in the NYTimes, it seems that environmentalists and animal rights activists are going after ship speeds to reduce the death rate among whales:

Ships are one of the two leading causes of unnatural death among right whales, and scientists have warned that the unnatural death of even one breeding female has the potential to tip the species toward extinction. From 2002 to 2006, there were 17 confirmed deaths by ship strike, at least six involving adult females.

In an effort to stop the fatalities, the National Marine Fisheries Service has tried to impose speed limits on ships within 30 miles of port. But the White House has delayed approval of the rule, which is opposed by some shipping companies.

The White House Office of Management and Budget is supposed to review federal agencies’ rule proposals within 90 days, with an optional 30-day extension. In the case of the right whale ship strike rule, it has been more than a year.

It seems that a simple thing like reducing boat speed limits in areas where whales are known to travel could drastically reduce death among these animals.
Posted by Kay Steiger at 4:12 PM