I went to see Brüno this weekend, helping it make $30.4 million on opening weekend. It was precisely what I expected. The movie is made up of attempt after attempt to squeeze uncomfortable laughter out of the audience. Maybe I read too much about it before I went to see it or maybe it was the day I was having, but I just wasn't into it. I found it predictable in its attempts at shock value.

I also found its attempts to expose homophobia a little too obvious. It's not surprising or shocking that those who try to "convert" gays through Jesus or fans of ultimate fighting might not be the most open-minded when confronted with the über-stereotype of gay culture. It seems like the choices of places to expose were rather low-hanging fruit. There are far more interesting and subtle forms of homophobia in today's culture, especially among those that theoretically support gay rights and want to be sure they don't come across as bigoted. That seems a far more interesting nut to crack (ok, I admit, pun intended).

Verdict: Less funny than Borat, but good for a laugh if you've got nothing better to do.
Posted by Kay Steiger at 3:00 PM 1 comment:

In It to Quit It

The news that Sarah Palin quit is old, but she certainly hasn't disappeared from the public eye. It's like we're reliving the last few months all over again, An article in today's New York Times examines her reasons for tossing the towel in on the Alaska governorship, and it seems to be exactly what I thought it was. A mess of low-level scandals got to be too much.

Yesterday Frank Rich seemed to say that it is precisely because she is quitting (and is so much more "real" than other potential Republican stars out there) that she's qualified to run for the Republican nomination in 2012. I'm not totally sure that's the case. He points out that she's more popular among the GOP then ever these days.

What's most strange about Sarah Palin is that she, unlike other failed vice-presidential nominees, didn't fade into the background: she continues to live out loud in the news. Palin stories generate more hits than other political stories. People are, in some weird way, fascinated by her.

Dahlia Lithwick, who incidentally I got to meet last week when she keynoted the Campus Progress journalism conference, insists that Palin is both charismatic and unintelligible. This is perhaps the root of the fascination. She's both successful at drawing attention and a mess at the same time. We can't wait to see what she will do next, certain it will be predictably more outrageous than the last thing.

I'm not one to gaze into the crystal ball, but I think we'll see Palin pop up every now and again. She'll continue to raise money for Republicans, especially among pro-life groups. But Palin's place on the public stage as an elected official is nearly over. This fact is perhaps best illustrated by a nugget found at the end of the Times story:

At the governor’s Anchorage office, staff members are struggling to roll with Ms. Palin’s surprise announcement. Last week, a clock on the wall continued its countdown. Under a “Time to Make a Difference” placard, the clock ticks away the days, hours, minutes and seconds until the scheduled end to Ms. Palin’s term. As of Friday, it had 513 days left.

Confirmation hearings for Supreme Court justices are evolving. We've gone from a simple stamp of approval by the Senate to something we see today. The first Supreme Court confirmation hearings I remember are those of Justices John Roberts and Samuel Alito. At the time, even though liberals knew that they were going to be very bad for liberal issues, there was a sense of inevitability. No matter how badly we knew it would be for America to confirm them, we knew that they would be confirmed, with "yes" votes from many Democrats.

With so many Democratic votes this time around, it's hard to imagine that Republicans feel anything but that inevitability. Instead, they will simply use the hearings to rally their bases, winking and nodding about overturning Roe v. Wade, the Second Amendment, and affirmative action.

Even though conservatives might feel on the defensive during the confirmation hearings of Sotomayor, the difference is that the Supreme Court, as we've seen with rulings this session, is still on their side. Sotomayor, if confirmed (and it's looking like she will be), is replacing one of the most liberal members of the Court. The balance of power still remains with conservatives.
Posted by Kay Steiger at 11:28 AM No comments:

These Are Your Liberals on Drugs

Drug reform is so hot right now. After years of the mess of overfull prisons, violence in Mexico, and battles over immigration that don't quite connect with the socioeconomic problems of the countries of origin, drug reform is in again. At least, among liberals it is.

First some required reading: "We Bring Fear" by Mexico journalist Charles Bowden, "The Patriot's Guide to Legalization" by Kevin Drum, "The Last Drug Czar" for the policy angle by Eli Sanders, and This Is Your Country on Drugs by Ryan Grimm (which admittedly I haven't read yet, but hear its very good). Finally, liberals, satisfied that the country is more-or-less (lately it seems more like less) on the right track politically, are turning to the under-discussed issue of what to do about the mess that is our drug policy in this country.

Slowly, though, states like California are beginning to experiment with decriminalization, which is pretty much the equivalent of looking the other way on recreational drug use. As Sanders wrote, these state policies are going to be what the federal government will look to if it ever decides to seriously consider revamping its drug policy. Let's hope the states can come up with a workable solution; one is long overdue.
Posted by Kay Steiger at 10:00 AM 1 comment:

It's been a busy month, but I just wanted to point out that here are some things I've written lately:

Traffic Bait, If I've Ever Seen It 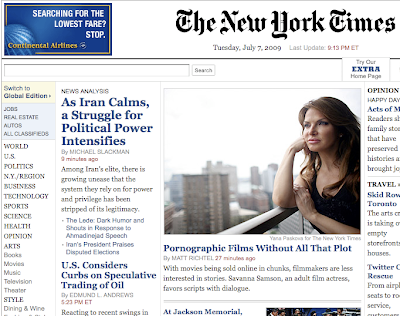