I listened to Amanda Marcotte's commentary in a recent discussion discussing the question of whether victims of rape ever bear some of the responsibility on a podcast called World Have Your Say by the BBC. Unfortunately, they let City Journal's Heather MacDonald talk more than Amanda, and the discussion got a bit convoluted. I was also somewhat astonished by some callers who asserted that the way women dressed was to blame for sexual assault. Still, the discussion was interesting and I was pleased that a couple of panelists pointed out that there's so much emphasis on educating women on what not to do but not nearly enough emphasis on teaching men not to rape.

Additionally, I think MacDonald's narrative is deceptive in many ways. In addition to the fact that she paints drunken girls at frat parties as the norm when it comes to rape, there's also a danger in painting this narrative of telling women how to avoid rape.

For obvious reasons, this is a very dangerous line of thinking. I wish the discussion about acquaintance rape wasn't weaving a narrative about unsafe behaviors are what cause rape.
Posted by Kay Steiger at 12:46 PM 1 comment:

The Center for Public Integrity has a great series on sexual assault on campus. The story today is pegged to the story of a young woman who sought charges against her assailant, Margaux J., a student at Indiana University Because most prosecutors don't want to touch sexual assault cases due to the “he said, she said” nature of the cases, women are usually left to pursue disciplinary hearings on campus. The story notes:

The Center interviewed 50 experts familiar with the campus disciplinary process, as well as 33 female students who have reported being sexually assaulted by other students. The inquiry included a review of records in select cases; a survey of 152 crisis services programs and clinics on or near college campuses; and an examination of 10 years of complaints filed against institutions with the U.S. Education Department under Title IX and the Clery Act. The probe reveals that students deemed “responsible” for alleged sexual assaults on college campuses can face little or no consequence for their acts. Yet their victims’ lives are frequently turned upside down.

Ultimately, Margaux's assailant "suffered" a summer suspension, when he was unlikely to be attending classes anyway. Margaux was ultimately so depressed and frustrated that she ultimately dropped out. If you can stomach it, it's definitely worth reading the whole story.

The Millionaire Matchmaker Meets Her Match?

Emily Gould interviews Patti Stanger, AKA the "Millionaire Matchmaker." I saw several outraged tweets about this:

"I think men have lost their balls," [Stanger] says to [Gould], when I ask whether there's a "crisis of masculinity" in America. "I think they're hiding them somewhere and they haven't taken them out of the closet and dusted them off."

"But if you think of that $200 every six weeks as, like, an investment in your man future… you should always have a little fund that you play with, on the side, and you say, I am not going to spend this weekend buying five drinks at the bar this weekend at $15 a pop. You can always get men to buy you drinks. Maybe you buy the first one, but not the second one. There's tricks to the trade. Maybe you're not gonna spend $500 on a dress that you wear twice. Maybe you go to Loehmann's instead."

"If a woman makes more money than a man, the minute she pays for everything, she becomes the man. If she chooses to be the man, if she enjoys being the man, if she doesn't want to be a female, it's OK. It works if the guy is OK with being the female."

Oh man, it's hard to imagine that a woman who auditions women to come to mixers with millionaires (until recently, Stanger refused to work with millionairesses) holds some kind of regressive stereotypes. Imagine! If you thought a woman who essentially marketed models and actresses to selfish, immature pricks for a hefty fee was some kind of feminist, boy would you be wrong.

Sorry to give this whole thing the sarcasm treatment, but Stanger is successful precisely because she holds these regressive stereotypes about men and women. Of course Stanger wants men who don't make lots of money to feel emasculated. In her mind, the more millionaires, the better to line her pockets with. And, as Yglesias points out, there's some social science to suggest that that wages do (unfortunately) play a factor in choosing marriage partners.

Now this isn't to suggest that Stanger's attitudes are some kind of act. I've seen the show. She makes no secret of her old-fashioned attitudes. In fact, her number one rule is that the people she sets up are not allowed to have sex on the first date (actually, I assume this is so that Patti won't get into trouble for running some kind of high-class escort service) because she's all about getting her clients to find love and marriage. She also constantly tells women they have to professionally blow out their hair to attend her mixers. Stanger buys into very old stereotypes about the roles of men and women. (The article says she went to a "soulmate psychic" for cripes sake. She's not exactly unwilling to buy into bullshit.)

But I'm finding it hard to muster the same amount of outrage I saw some of my friends exhibit. Stanger exists for people that want to buy into those stereotypes (and the people who want to "ironically" enjoy her rants). But if we're going to start policing the airwaves with feminist rage, I can think of about a dozen shows I would rather direct my energy at than Stanger's. I think the appropriate response here is to laugh. Then move on with your life.

Excuse me, I have to go invest in my man future now.
Posted by Kay Steiger at 4:17 PM No comments:

I have a piece up over at The American Prospect on the Oklahoma anti-choice law that was overturned by a judge on Friday. While it's a victory, the news isn't all good:

On Friday, an Oklahoma judge ruled against a state law that was poised to, among other things, force women obtaining an abortion to disclose a substantial amount of personal information that would be posted on a public Web site. The privacy violation was enough to enrage many pro-choice bloggers; Lynn Harris wrote on Salon's Broadsheet, "The requirement … would scare the shit out of me." But the law also sought to ban the use of the word abortion or related words in Oklahoma code and impose a ban on sex-selective abortion. The law's defeat is a victory for reproductive-rights activists in Oklahoma, of which there are few.

But perhaps what's interesting about Oklahoma is not the outcome of this particular case, but the way the case was argued. The Center for Reproductive Rights, which brought the suit, avoided the traditional argument that it was a violation of privacy. Instead, the CRR argued that the law was unconstitutional because it packed too much into one law. The Oklahoma Constitution includes what is called the single-subject rule, which says laws can't combine various things into one piece of legislation.

It's no accident that the CRR chose the single-subject rule as its chief (and only) argument. "It was a purely strategic decision. We felt that we had such a strong claim on the single-subject-rule grounds that we were going to try to knock the law down on those grounds," says Jennifer Mondino, lead attorney for the CRR on this case.

Go on and read the whole thing.

Posted by Kay Steiger at 9:28 AM No comments:

The Thing About Condoms 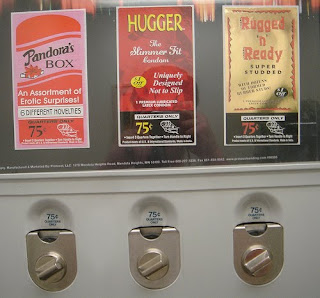 (Flickr/quaziefoto)
Today I read about a recent study (released in time for National Condom Week!) that found the following:

Nearly half -- 45 percent -- said they had used a badly fitting condom during the previous three months.

These men were more than 2 times as likely to say the condom broke or slipped when they used it. They also often reported it was irritating to wear.

But this reminded me of some reporting I did a while back for a relatively unrelated story. I spoke with a researcher whose specialty was investigating how women feel about using contraception and condoms, because all too often, discussions about condom use revolve around men.
Now, I'm not blaming researchers for focusing on men. After all, men are the ones that ultimately are expected to wear the condoms during intercourse. As a public health advocate, you have to get men on board if you want to curb the spread of HIV and other sexually transmitted diseases.
But women are also a factor in heterosexual encounters. And I know plenty of women that don't like the feel of condoms either. It's true that my evidence is anecdotal, but if women also don't like to use condoms, it makes the battle for getting heterosexual couples to use them that much more difficult.
Posted by Kay Steiger at 7:00 PM No comments:

I interviewed Mark Halperin about his new book, Game Change: Obama and the Clintons, McCain and Palin, and the Race of a Lifetime

, over at Campus Progress. Check it out.
Posted by Kay Steiger at 10:29 AM No comments: