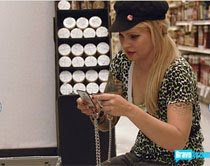 So last night was the first episode of Project Runway. Maybe it's just me, but I don't remember these first episodes feeling so rushed. They start with 16 designers. (Man that seems like a lot. Is that more than other seasons?) The girls seem significantly cuter this season, rocking the red lipstick and the thick indie bangs. But there is one designer who sort of freaks me out. I think some people with think of him as this year's Christian because he's so outrageous, but I think this dude is weirder and far less fabulous. Blayne has an obsession with tanning. His skin looks patchy and weird. I'm half afraid he'll have to leave the show to treat his melanoma. Besides, he didn't even make a cool outfit. His too snug adult onesie reminded me of that gold "sweater dress" Zulema made in season two where you could see the model's entire ass.

The winner last night was this girl, Kelli, for her innovation with coffee filters and vacuum bags. I thought the end result was pretty "eh" but the judges thought it was good. Thank god the asshole Jerry is out. He was hating on everyone's outfits and then ended up getting sent home.
Posted by Kay Steiger at 11:30 AM

Blayne is orange and annoying.