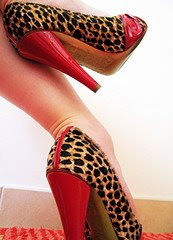 From the Daily Mail:

The report 'Working feet and footwear' found that a number of big companies insist female staff who deal with the public wear slip-on shoes or high heels.

The unions called for staff to be allowed to wear the footwear they felt most suitable, but warned that prolonged wearing of stilettos would lead to health problems.

It published a guide for employers declaring: 'heels should have a broad base and be no higher than 4cm... if worn for long stretches no higher than 2cm'.

TUC General Secretary Brendan Barber said: 'We were surprised how many times we found employers' dress codes did not permit the wearing of comfortable footwear.

Image from Flickr user Porcelaingirl° ~is on holiday~ used with a Creative Commons license.
Posted by Kay Steiger at 4:53 PM