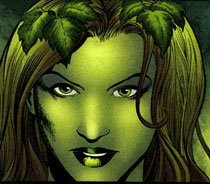 I love Halloween. It's definitely one of my favorite holidays, if not my favorite holiday. I've loved it ever since I was a kid, and I just never grew out of it. This year, I'm going as Poison Ivy, one of the villains from the Batman comics.

What's interesting about Poison Ivy is that she's an eco-terrorist. She harks back to a day of a different kind of protesting. Now everyone's into "greening" and the environmental movement has become popular. But characters like Poison Ivy remind us that the environmental movement came from a pretty radical past. It wasn't that long ago that Greenpeace was attempting to forcibly shut down oil rigs, or that some animal rights activists sought to "free" animals from captivity.

Today the movement has mellowed out a lot. But it's also a lot more effective than it used to be. By making themselves less radical, the environmental activists were allowed to sit at the table and negotiate for favorable legislation. Granted, it seems like sometimes against an anti-environmentalist president it's all for naught, but there is real optimism within the environmental movement that they will get their message across soon.
Posted by Kay Steiger at 9:38 AM