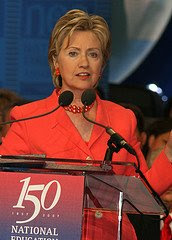 I for one think it would be a really, really bad idea to have Hillary Clinton as Secretary of State. Some feminists are in favor of this, presumably because they think it's good to have as many women in high-level administration jobs as possible. But the reason Hillary Clinton is bad on foreign policy is because she's known to be pretty hawkish, voting for the war in Iraq and never apologizing for it. It's a position I can understand as senator, but not in such a key diplomatic position as SoS. In fact, during the primary season, Clinton made a big deal out of the fact that she wouldn't meet with foreign leaders like Mahmoud Ahmadinejad without preconditions. Since the main job of the SoS to meet with foreign leaders, I think this seems like a bad fit.

Besides, Clinton has been a key leader on feminist issues in the Senate and with her experience on health care she seems like a key person to work to pass legislative change on her pet issues. I agree that it's important for the SoS to be someone who is pro-choice and with a good understanding of human rights issues (that's why I have reluctance to favor someone like Chuck Hagel, who has a good background in liberal internationalism and diplomacy), but I still think that Clinton isn't quite the right choice.

if Hillary becomes the Sec. State, hopefully she will not be excessively distracted by outside drama or personal career plans, etc.