Why I Voted Today 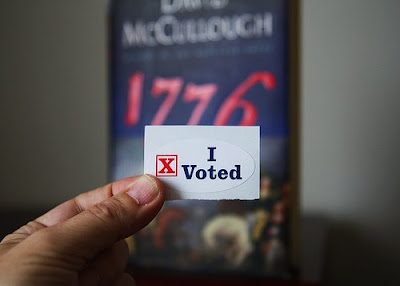 Today is Election Day. It's the first time I've ever voted in a non-incumbent presidential election and the first time I've voted in a District of Columbia general election. I waited in line for about an hour and 45 minutes at my polling station in the U Street neighborhood of D.C. The District obviously doesn't have a congressional delegation (that votes) so the real things on the ballot are the presidential election and some council and school board stuff.

I have a pretty snarky comment about the election here, but the real reason I vote is because I believe really strongly in having a pro-choice America. The right has done a lot over the past several years to chip away at the rights of women, and it's really important to me that women have access to contraception and, if they need it, abortion. It's also important that we pass comprehensive health care reform, return to a liberal internationalist foreign policy, look at giving D.C. congressional representation, invest in clean energy (not clean coal), make sure college is affordable, and young Americans get the high-quality k-12 education they deserve. Those all sound pretty broad but they're all good reasons to vote.

The truth is that when we're voting we're looking at making life better for the poorest Americans. The rich folks will be fine. Even if they're worrying about their stock portfolios, the real people we need to worry about is people who have lost their jobs, can't afford health care, and have to cut back because they can't afford groceries or to fill up at the pump. Those are the people we need to worry about.