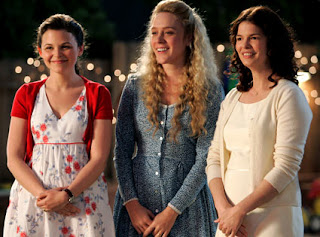 I know most people probably don't watch Big Love anymore because it's been more than a year between seasons, but I'm still totally into it, even as a feminist I should object to everything it stands for. Last night's episode might as well have been called "Family Planning" because of all the (spoilers ahead) reproductive talk.

At the beginning of the episode, we also see third-wife Marge and Bill in the middle of their "marital duties" and Marge begging Bill to "pull out." Marge has just had a baby and isn't ready to have another. I should take a minute here to note that pulling out is not a recommended form of birth control for anyone who doesn't actually want to get pregnant. It also puts you at just as much risk of STDs as if you didn't pull out. Marge asks Bill, "Why can't Nicci have the next child?"

Marge gets suspicious about the fact that second-wife Nicci, who came from the Mormon compound, hasn't been pregnant in over 4 years. It turns out that Nicci is more than reluctant to go through another pregnancy -- she has secretly been on birth control the entire time. Finally, after some shame from her husband and sister wives, she stops taking the pills. When hauled into a fertility clinic, she admits to the gynecologist that she's been on birth control. The gyno (a dude) asks Nicci to be honest about whether or not she wants to have more children and adds that it's her choice. Nicci objects that she's never had a choice about anything in her life. When the doctor asks her if she wants another prescription for birth control, Nicci nods.

To me this is a big message about coercion of having a large family. Oftentimes women that most strongly desire control over their own reproduction are women that already have children. They don't want to have more for one reason or another, and might lie to their husbands (and, in this case, their sister wives) about taking birth control. Both Nicci and Marge have both had two and three children respectively and don't want more. But their religion points to the role of women as child-bearers.

Additionally, Marge voices a desire to go into sales, something she discovers she has a knack for. She is restricted by the family, and first-wife Barb says that they all agreed it was Nicci's turn to work. Barb herself in this episode is terrified of a return of cancer, something that caused her to have a hysterectomy seven years earlier. She dares not tell anyone but her husband until the results of the biopsy return.

Finally, the oldest daughter, Sarah, is sobbing at the end of the episode. At her feet is a book about options for expecting mothers. Sarah, who became sexually active at the end of last season, breaks up with her boyfriend because she's not in love with him and tells her parents she wants to go to college out of state for nursing. Sarah, because of her conservative Christian upbringing (even if she wasn't raised as a polygamist until late in life, her family had always been a member of the LDS church before), is unlikely to have an abortion. I'll be interested to see how they deal with Sarah's pregnancy moving forward. She has always been one of my favorite characters on the show because she protests her family situation.
Posted by Kay Steiger at 11:27 AM

Big Love is Quite interesting show.I love to watch Big Love Episodes again and again.So i have downloaded the show.