Secretary of State or Sexy Crimefighter? 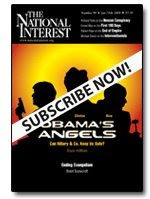 Via Matt and Spencer, this is a doozy. The National Interest has decided to portray three extremely qualified, professional women in public offices as, you guessed it, a spinoff of Charlie's Angels. Matt astutely puts it this way:

Hillary Clinton graduated from an elite law school, was a staffer on the Hill, a partner in her husband’s successful political career, a United States Senator, and a formidable presidential candidate before becoming Secretary of State. Susan Rice is a Stanford graduate, a Rhodes Scholar, a McKinsey consultant, a National Security Council staffer, the youngest-ever Assistant Secretary of State, top foreign policy hand on a winning presidential campaign before becoming Barack Obama’s UN Ambassador. Janet Napolitano was a federal prosecutor, a state Attorney-General, and a twice-elected governor before taking the helm at the troubled Department of Homeland Security.

Naturally, The National Interest thinks an analogy to the sexy crimefighters of Charlie’s Angels would be an appropriate analytical frame.

This goes to show that no matter how accomplished or professional a woman is, she is often depicted in a sexualized way.
Posted by Kay Steiger at 10:27 AM