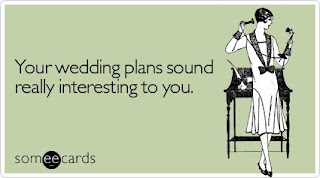 There seems to be a lot of talk about weddings and marriage lately. Over the weekend Amanda Marcotte, Jessica Valenti, and Kate Harding all had thoughts about weddings. They all had some interesting things to say, but what I found most interesting was how personal their thoughts were on this subject. None of them said it exactly, but the implication is that precisely because these women spend a great deal of their time thinking about gender inequalities, they're expected to deal with the patriarchy perfectly in their everyday lives. It turns out the at the personal, when it comes to marriage, really is political.

What I find so frustrating about this whole thing is that these women are somehow held to a different standard than other women. Professional feminists, if such a thing exists, are somehow expected to be more "feminist" in their personal relationships than your typical woman. This seems like an absurd standard, especially when we spend a great deal of our days talking about how difficult it is to make feminism translate into everyday life.

I get the battles of Amanda, Jessica, and Kate. Although I'm not really near the age where I'm thinking about getting married, I've seen enough family members and relatives to realize it's really hard. And hortense noted on Jezebel this weekend, "the thing that annoys me even more than traditional wedding culture is the 'offbeat bride' phenomenon, which celebrates couples who choose to avoid your standard wedding fare for something a bit more unique and personal. But does it really? I mean, really?"

On some level, she's right. There are always going to be inequalities in the heterosexual relationships we're in (and probably in the same-sex relationships as well). It's the frustrating part of human life. Sometimes you're giving more than your taking, and sometimes the partnership can be wonderful. These are individual battles. It's up to each of these feminists to deal with their partnerships the way that she feels appropriate; each of these women is dealing with her relationship in a way that feels feminist for her. There isn't one big message for anyone.

I know that that sounds kind off message and the message can get twisted around to say that Bristol Palin's engagement might be feminist for her. But there is not feminist playbook for weddings and marriages just yet. It's something that women and men are experimenting with in their individual lives. By giving women permission to try things -- and to fail -- we're really doing a favor for all of us.
Posted by Kay Steiger at 5:23 PM