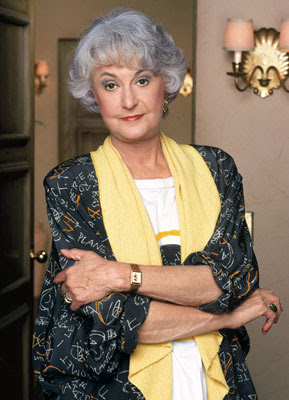 I was really sad to learn that Bea Arthur died. I used to watch Golden Girls as a kid with my sister, and Dorothy was easily my favorite characters on the show. I loved how confident, sarcastic, and hilarious she was. Her excellent comedic timing made me want to be her when I got to be her age.

Although her hayday was in the 1970s and '80s, she and the other women on Golden Girls really shaped my ideas about women as senior citizens. The show could be silly at times, but ultimately it really showed that post-menopausal women are three-dimensional. They have wishes, goals, and even sexual desires. Most of us don't really like to think about that since when we think of older women, we think of our grandmothers. But having these women on television was a great way to have role models that weren't your typical grandmother (or, maybe for some of you, these women were a lot closer to your grandmother).

Fundamentally it was a really feminist show. These women depended on each other rather than on men for emotional and financial support. Their lives were fulfilling and they had ways of sharing their lives with their new friends, rather than just waiting for their relatives to check in with them every once in a while.

I'll miss you, Bea Arthur, but I also learned a lot from you.
Posted by Kay Steiger at 9:53 AM