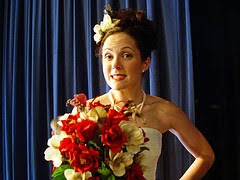 Apparently Monica Hesse's horrible puff piece on Brian Brown, the director of the National Organization for Marriage, wasn't enough to stop her from publishing more worthless drivel in the pages of the Washington Post. She didn't want to step too far from the topic she knows she can screw up write about: marriage.

See, Hesse is like other unimaginitive journalists. She cannot possibly comprehend that what's going on in her own personal life isn't interesting to the rest of the world. That's why, apparently she decided to write a very annoying article on the fact that she's getting married. Um, is this just some gaint scheme to link to her wedding registry?

Much like the last time the Washington Post tried to address the "When is a good time for people to get married" question, this time is an utter failure. Hesse is baffled that some people think 26 is too old to get married and some people think it is too young an age to get married. She thinks it's determined by how old her friends were when they got married (if they have that option at all; she seems to have fallen for Brian Brown's argument against gay marriage, so I guess she doesn't care if her gay and lesbian friends don't have the option).

She seems to have stumbled on the already prevelant data that the average marriage age tends to be lower in rural areas than it is in metropolitan ones. There's also marital status data by age, socioeconomic class, and size of families over time.

But Hesse couldn't be bothered with data or statistics to inform her piece. Instead, her conclusion is that you should not get married unless you know where "home" is. Well. Gee. Thanks for that.

Honestly, I think we should stop worrying about when people get married. Or if they get married. Rather than trying to figure out what the "best age" for heterosexual couples to get married is, perhaps she could have thought about a real issue for a change.

But I guess that's too much to expect.

I just stumbled on this, but...I think you totally missed the point. The column was written for the now-defunct "XX Files" for the Post's Sunday magazine; the column was always a first-person narrative/essay (in fact, they've renamed it "First Person," I think). Audience is the weekend paper-reader, arts-and-leisure type person. So framing it as a piece of journalism is disingenuous at best (not to be snarky, seeing as though your education credentials are plastered quite visibly on the front of your blog, you think you'd know the value of "doing your homework"). Second, this is not "tackling the question of when to get married," and Hesse doesn't even come close to advising that people shouldn't get married if they "don't know where their home is." She's simply musing about an interesting phenomenon she's experienced in juggling two regional identities. No tackling of questions or statement-making herein; if she had done that, it wouldn't have been printed in XX Files.

I also question whether you did more than skim the article. Besides completely missing the point she makes about "home," you also mention in your post that she is GETTING married, when her article clearly states that she is already married.

Anywho. What's your beef with Monica?