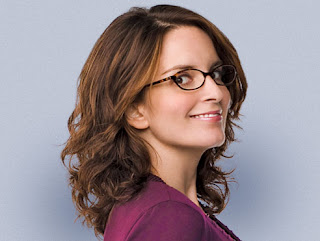 Tonight is the season four premiere of Tina Fey's critically acclaimed and Emmy award-winning show 30 Rock. Feminist blogs have salivated over a smart and funny feminist like Tina Fey experiencing success as a TV writer, a field in which women are severely underrepresented. TV critics at the New York Times and USA Today are not impressed.

Alessandra Stanley writes in the Times that the problem with 30 Rock is Tina Fey herself:

When they star in their own semiautobiographical television shows, the best comedians play an exaggerated caricature of themselves, notably Larry David on “Curb Your Enthusiasm,” but also Ray Romano on “Everybody Loves Raymond” and Bill Cosby on “The Cosby Show.”

Ms. Fey isn’t as convincing, or as funny, playing Liz Lemon, perhaps because the hapless single head writer of a late-night sketch comedy show doesn’t track as a comic distortion of Ms. Fey. She has surrounded Liz with a menagerie of wonderfully silly and original characters and is reluctant to play their straight man. Liz’s foibles — she dresses badly, is a junk-food glutton, can’t get a date — are the kind of flaws that thin, beautiful actresses affect because they think it makes them more approachable. None of those traits seem natural to Ms. Fey or plausible for Liz.

Ms. Fey plays a satirical version of herself and seems miscast in the part.

Stanley's critique is almost nonsensical. She seems first to be saying that Fey is too "real" to be around such silly comedic characters (presumably like Tracy Morgan's Tracy Jordan), yet her exaggerated characteristics are "affectations" that are unbelievable when played by her. If only Tina Fey's comedy didn't star that annoying Tina Fey, Stanley seems to be saying.

Admittedly, I haven't seen the screener these TV critics were privy to. Perhaps season four of 30 Rock won't be all that great. But I find the criticism that Fey isn't entitled to play a comedic version of herself in a series written by her when Larry David, Ray Romano, and Bill Cosby are a little odd. And why suddenly come to this realization now? Has Fey somehow become less "herself" since season one?

But I've been a watcher of 30 Rock recently even if I wouldn't count myself a huge fan. I find some of the commentary of Fey in a management position as a woman smarter and funnier than anything else on TV today. And I've always found Lemon's struggle to deal with the exaggerated characters on 30 Rock to be more of a commentary on what it's like to manage a group of actors, writers, and comedians.

Maybe season four is suffering a slump, but many comedies do as they move from the new hot thing to more established comedies. It seems weird to blame that on Fey's portrayal of Liz Lemon.

Cross posted.
Posted by Kay Steiger at 11:24 AM