How Health Care Reform Screws Over Women (and All of Us) 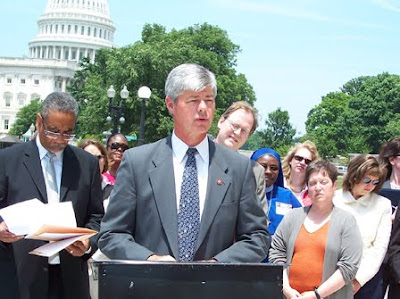 Over the weekend, the House of Representatives passed a (somewhat final) version of the health care reform bill. There are a lot of good things about this bill. It'll provide coverage to a lot of people that didn't previously have coverage, make health care more affordable, and increase options for health insurance. These are good things. But I'm still not happy. Because this health care reform bill, although it has a lot of good aims, falls short in key ways.

One of the biggest problems with the bill the House voted on this weekend is that it includes the Stupak-Pitts amendment, one that, according to a Planned Parenthood press release, would:

This means that the Stupak-Pitts amendment is actually an amendment that outlaws federal funding for a legal and sometimes medically necessary procedure, abortion.

In other words, in a bill that seeks to increase health care for Americans, it actually restricts abortion coverage -- health care coverage -- for thousands if not millions of women in this country. Feminist groups are mad about the Stupak-Pitts amendment. NARAL president Nancy Keenan released a statement that said,

It is unconscionable that anti-choice lawmakers would use health reform to attack women's health and privacy, but that's exactly what happened on the House floor [Saturday night]. Even though the bill already included a ban on federal funding for abortion and a requirement that only women's personal funds could pay for abortion care, Reps. Stupak and Pitts took their obsession with attacking a woman's right to choose to a whole new level. We will hold those lawmakers who sided with the extreme Stupak-Pitts amendment accountable for abandoning women and capitulating to the most extreme fringe of the anti-choice movement.

Planned Parenthood strongly opposes the Stupak/Pitts amendment which would result in women losing health benefits they have today. This amendment would violate the spirit of health care reform, which is meant to guarantee quality, affordable health care coverage for all, by creating a two-tiered system that would punish women, particularly those with low and modest incomes.

This is perhaps because that being anti-choice is no longer a partisan issue. The Stupak-Pitts amendment was lead by many anti-choice Democrats, including the amendment's sponsors, Congressman Bart Stupak (D-MI). While there is a group called Republicans for Choice, they're mostly a fringe group that maintains little power within their party and grudgingly endorsed the McCain-Palin ticket in 2008.

Furthermore, the bill the House voted on bans undocumented immigrants from insurance exchanges (despite the fact that they receive coverage in emergency rooms -- the most expensive kind of care -- whether they can afford to pay or not and raising the cost of care fore everyone else). Without complete and comprehensive coverage and access for women and undocumented workers, we have health care reform that fundamentally exacerbates long-standing class differences.

The current situation for women seeking abortion care isn't good. Even though abortion is legal -- and has been for decades -- it is becoming increasingly likely that if you have money than you have access to abortion. If you don't than that access disappears. While the majority of health insurance plans cover abortion in some capacity, those that are insured tend to be among those employed at higher-paying salary jobs or those that can afford to purchase insurance on their own. Access is an issue even for those that can afford abortion care. Nearly 90 percent of counties in the United States have no abortion provider, meaning that a woman seeking abortion will have to travel (often several hours) to another county to obtain an abortion. Many states where abortion coverage is scarce have also passed laws that require women to make multiple appointments, meaning that a working-class woman who has no sick leave would have to give up two days of work to make the appointment. Furthermore, the Hyde amendment, a law passed decades ago, has restricted federal funds -- often the only way some poor women can obtain medical coverage -- from paying for abortions. This means that women often delay abortions later until they can save up enough money to pay for the procedure, making the abortion a more dangerous procedure for the woman.

The situation isn't completely hopeless. Some are hoping that the amendment will be pulled during reconciliation. Others are advocating for an amendment to the Senate's health care bill that would repeal the Hyde amendment. Francis Kissling, founding president of Catholics for Free Choice, wrote,

If nothing else happens as a result of this defeat, complete and total dedication to overturning Hyde must be the centerpiece, indeed the single objective of our movement. It is not clear if the effect of the Stupak Amendment will be that the door will close on ever restoring federal funds for abortion, but every effort to make sure that does not happen must be made. We must convince enough people that the only immorality is using poor women as a way of expressing one’s moral outrage. Either we all have the right to choose or none of us has it.

President Obama has always supported overturning Hyde and we now need to insist that having achieved his political objective with strong support from the women’s movement, he must take up the true moral cause – giving women with no or low resources the same right of conscience as those with sufficient money to pay for their own abortions have always had.

This seems an unlikely scenario, but it is precisely because it is unlikely that it's so worrisome. The debate over abortion (and for that matter, access on all health care) has moved unbelievably far to the right. We're no longer talking about expanding access to reproductive care, even with a pro-choice president and a pro-choice Congress. Instead, we're talking about how to combat new proposals for restricting abortion. As Latoya Peterson put it at Jezebel, "Ladies and gentlemen, we got hosed."