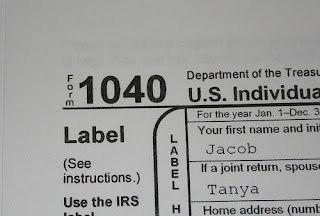 All too often, debates over same-sex marriage are couched in terms of religion. There's religious group that has been made famous with its slogan, "God Hates Fags." There's an entire (really great) documentary about what the Bible really says about homosexuality. Former presidential candidate (and 2012 Republican favorite among conservatives) Mike Huckabee once said gays participate in an "aberrant, unnatural, and sinful lifestyle."

But fundamentally religion is just a red herring. Many churches decry same-sex marriage, but there are an increasing number who also recognize same-sex marriage. What the debate is really over is tax policy. Dry, boring, math-heavy tax policy. You see, everyone in America used to file their taxes individually. Each person would pay for the amount of taxes they owe and everyone would move on with their lives. This was, of course, at a time when men were making a lot more than their spouses (to be honest, they still make more than their spouses, but the gap isn't as big). So some clever people decided they would pay a lot less in taxes if couples filed jointly and divided their tax rate over two people. Later, as "family values" took hold, married couples even got more tax breaks.

This was all the subject of an event today at the Tax Policy Center (a joint project of the Urban Institute and the Brookings Institution), called "The Higher Cost of Being Gay: Life, Death, and Taxes."They talked about all of the legal and tax ramifications for same-sex couples in great detail. I won't bog you down with the details (as I'm not even going to attempt to explain such things), but the Urban Institute has a good summary of this stuff from 2004.

Fundamentally, though, the debate about same-sex marriage has been obscured by the religious debate, when fundamentally others are trying to figure out how to properly tax couples who live together and want to share their assets like a married couple does. Of course, tax policy doesn't create passion in activists the same way that civil rights do.

My suggestion? Just level the playing field, making everyone go back to filing individually and that could shift the debate. (Flickr/theblog)

You are absolutely correct! The additional taxes my husband and I pay as a same-sex couple helps subsidize heterosexual families who pay less. That means their kids get more and our two kids get less. Unfortunately, taking away the joint filing for married couples is a political non-starter.The only (relatively short) way to marriage equality, which was working, is though domestic partnerships because clearly, the marriage-only strategy is a failure. Comparing the trajectory domestic partnerships was on when that strategy was halted with the continuous defeats and heartache the marriage-only strategy has given us, it is clear that the domestic partnership strategy would have brought us to one, unified category of marital rights for both heterosexuals and gay people much, much sooner. Unfortunately, because my community does not understand the difference between a goal and a strategy, we will be fighting this for a very long time to come. I have no doubt that marriage-equality will eventually be achieved. But, with the current marriage-only strategy, no one over forty will live to see it. (Unless, of course, the US Supreme Court decides in favor of same-sex marriage, which is unlikely.) I find this very sad because I am 57. Susan B. Anthony did not live to see women's suffrage become a reality. So, at least historically, I am in the company of greatness.