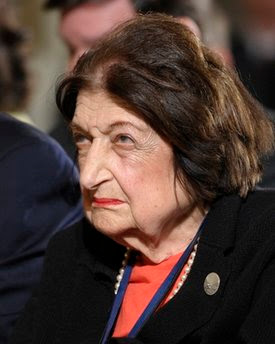 Helen Thomas as I'm sure everyone on the Internet read today, retired after making controversial comments about Israel/Palestine. Adam Serwer had some good things to say on the subject. I, like Adam, am not going to defend her remarks themselves. I don't think anyone really is. But I thought I'd recount my own personal reaction to Helen Thomas' retirement, since -- hell -- it's my blog.

It is for that reason that I respect and admire Thomas. She is a fiercely independent woman who fought her way through endless sexism and injustice and was never afraid to speak her mind while doing it. Others remember her for asking the tough questions of the Bush administration when everyone else was afraid to. She had too much seniority to care what President George W. Bush or his colleagues thought -- and she had too much seniority to be kicked out for asking the questions.

But. And there is a but.

Thomas wasn't always right about things. In fact, when I saw her speak at a feminist conference in 2008, I was dismayed to hear her echo the sentiments of Gloria Steinem and other second-wave feminists who seemed to be claiming that Barack Obama's popularity was proof that racism had long faded and sexism remained real and present as Hillary Clinton's campaign floundered. I can't necessarily blame her for her sentiment. It seemed common enough among women of her generation, who marched the marches and fought the fights in the 1960s, '70s, and '80s. But a lot of young women sitting in the room with Thomas felt she was out of touch and that playing oppression Olympics wouldn't do anyone any good. Her recent remarks seem to reflect the same idea.

I believe Thomas, like so many prominent figures in politics and public life -- not just today, but throughout history -- have to be viewed in a complicated way. You have to acknowledge both the great strides and the shortcomings. To do less is not to do justice to these fixtures in public life.

I thought the same about her remarks during the presidential campaign. I understand where they're coming from, but I don't think they realize how those arguments sound to younger ears.

On a somewhat-related note, there was an article in the Minnesota Historical Society Quarterly not too long ago about female journalists in Minnesota. I'm not sure when it came out (probably in the past 12-18 months; I'm working through a backlog) but I know it was about the time I discovered your blog. You'd probably find it interesting.

Interesting! It looks like not many of the their articles are online, sadly. I'd love to read about it otherwise.