Why Insert Racism and Sexism into 'The Walking Dead'? 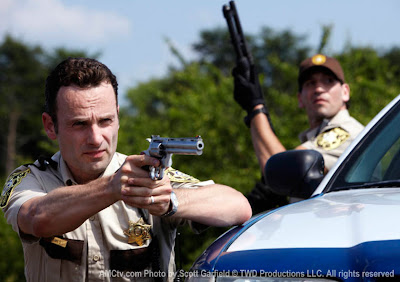 There are few shows I was more excited about this year than The Walking Dead. A television show about the zombie apocalypse? Sign me up.

I know I'm coming a bit late to talking about the series, since it's already a third of the way over, and Shani already talked about how The Walking Dead went from its first episode filled with tension and methodical pacing to throwing a bunch of new characters at us all at once -- including racist Merle Dixon. As Shani notes, the character of Merle isn't in the comic books and his racism has an almost cartoonish element.

I can appreciate that The Walking Dead doesn't want to be a shot-for-shot adaptation of the comic book to the screen. The creators likely want to draw from the comic books but also create their own world. That's understandable. But the things that they've added to the story thus far are some bizarre choices.

At the opening of the first episode, Shane (played by Jon Bernthal) starts with a long misogynistic rant about how women are genetically incapable of turning off the lights. Rick (played by Andrew Lincoln) listens patiently through the rant and notes that his wife doesn't seem to have trouble with the light switches in their house.

The funny thing is that this exchange isn't in the comic books, and I can't figure out exactly what the motivation is to add it in. Perhaps it serves to make us dislike Shane more, since later in the episode we discover he and Rick's wife began an affair when they thought Rick was dead.

But it's also possible that the creators of The Walking Dead wanted to make the characters in show (and the people in it) more like caricatures of people living in the South. They seemed to add a bit more racism and sexism than the original comic called for -- I guess to make it more, uh, believable? I'd be interested to learn what the creators' motivations were here, since I can't really figure it out beyond the notion of adding more racism and sexism is par for the course when it comes to Hollywood.

I have to say, though, if they were looking to explore dynamics with Southern white supremacists, they should have just looked to Justified, which seems to have pulled it off a lot better. The white supremacist in that show, Boyd Crowder (played by Walton Goggins) keeps the audience guessing as to exactly what his motivations are for staying a part of the white supremacist movement.

Still, I'm excited to see the remaining four episodes of this season of The Walking Dead and next season as well. Hopefully they're planning to do something interesting with the elements they added instead of just adding more racism and sexism into the mix for the sake of it.
Posted by Kay Steiger at 1:34 PM