'Big Love' is Back 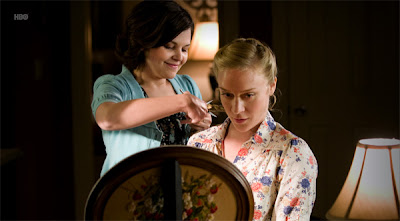 (HBO)
This Sunday the HBO series "Big Love" returned for its fifth and final season. There's no question the quality of the show has declined significantly over time -- so much so that one of the show's stars, Chloe Sevigny called last season "awful" "as far as I'm concerned." Still, I'm hooked on the show and couldn't help but tune in.
In some ways, the success of "Big Love" is curious. The fictional drama is focused on a tiny sliver of a tiny minority: Mormon polygamists. Mormons, according to the most recent census estimates, at 3,158,000 self-identified individuals make up just over 1 percent of the total U.S. population. Yet Mormons are surprisingly prevalent in public life. The U.S. Senate is the workplace of six men who self-identify as Mormon (an impressive representation considering there is currently no African American member of the U.S. Senate), including Senate Majority Leader Harry Reid (D-Nev.) and the U.S. House of Representatives has 15 Mormon members. Obviously the representation is concentrated in the Southwest region of the United States. But though the presence of Mormonism in public life is prevalent, the focus on polygamous Mormons seems almost absurdly outsized. (The Church of Latter Day Saints officially ceased the practice of plural marriages in 1890.)
"Big Love" is also a sliver of the wealth of pop culture out there about polygamist Mormons these days. Last year saw young adult novels Keep Sweet

,The Chosen One: A Novel

, and Sister Wife as well as the more grownup novel Hidden Wives

. (I read a meta review of these books in the last issue of Bitch magazine, so I can't attest to their quality individually.) TLC also started airing its reality show "Sister Wives" last fall.
Last season, "Big Love" definitely tapped into the fascination with Mormons in public life with its main story arc. The show seemed to be exploring the question, what would happen if someone, in this case Bill, were elected to office while keeping the secret that he is a polygamist under wraps? Because it would be nearly impossible for this to happen on a national level (although you never know), it seemed obvious to turn to state office, something the press pays little to no attention to.
At the end of last season (spoilers ahead if you haven't seen it), Bill publicly acknowledges the fact that he is in a plural marriage, to the disgust of many of his supporters and employees. The premise for this season seems to be dealing with the aftermath of that. If you think living in a secret plural marriage is hard, the show seems to be concluding, living in a public one is infinitely harder.
Big Love will end this season, but it doesn't look like the fixation on polygamy or plural marriages will end anytime soon -- after all, TLC's "Sister Wives" has been renewed for a second season. In this way, popular representations of polygamy has become a way of exploring alternative sexuality, family, and gender issues in a community that typically adheres to the very traditional "family values" nature of conservative Christianity. Popular culture will continue to look for skeletons in the closet of Mormonism, whether they're fictional or not.
Posted by Kay Steiger at 2:28 PM