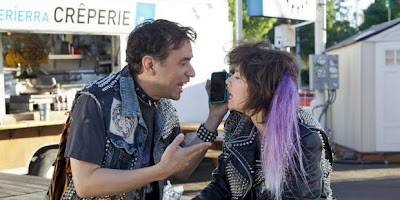 If Stuff White People Like were a television show, it would be Portlandia. The show, which stars former Saturday Night Live comedian Fred Armisen and Sleater-Kinney-co-founder-turned-music-commentator Carrie Brownstein, is airing on the Independent Film Channel and is set in—you guessed it—Portland. And what better place to set a series that mocks mostly white, urban, liberal culture than one of the whitest cities in America?

There’s been much debate about what, if anything, constitutes white culture. But it does seem clear that there is just as much a stereotype of white liberal culture as there is of white conservative culture. As much as we imagine the average white social conservative to be an SUV-driving, megachurch-attending, McDonald’s-eating, GOP-voting, Wal-Mart-shopping white person, we also imagine the average social liberal to be a yoga-doing, farmers-market-shopping, arugula-eating, library-card-holding, bike-riding, latte-sipping, liberal-blog-reading white person. [Full disclosure: This last weekend I attended a yoga class, checked books out form my local library, and stopped in at a store that specializes in local meat and dairy. I also have been known to occasionally nibble on arugula and pursue the occasional liberal blog.]

The shorthand for this stereotype is often “hipster” or “aging hipster”—someone with enough time and money to update a Tumblr and form opinions about the latest indie rock band while Tweeting about it incessantly. If you need further help on this concept, feel free to browse the archive of the New York Times style section. Of course, there are urban liberals that are non-white (incidentally an idea the Times style section also delved into). The reality is, of course, much more complex than that: Not all that partake in hipster culture are white; not all whites are hipsters. But for all of the complexities, these stereotypes still exist—the culture typified in Portlandia is indeed predominantly white.

And Portlandia isn’t afraid to mock such culture. The pilot episode, which has been getting some love from sites such as Videogum (itself highly beloved among hipsters), features a musical number titled “The Dream of the ‘90s Is Alive in Portlandia” that skewers urban white liberals who seem to never work. This is perhaps a bit of a sore spot since unemployment is 9.4 percent nationally and Oregon’s is slightly above that, at 10.5 percent. One skit even features a cameo from Boardwalk Empire star Steve Buscemi (which also features issues of Bitch magazine in the background). Urban liberals might find some of the actions of the characters uncomfortably familiar.

Of course, the show, for all its comedic gems, opens up larger questions about what kind of race-based mockery is acceptable. Indeed, people had issues with Stuff White People Like for that very reason. Even mocking white people on the basis of race is still problematic because it more mocked a specific subset of urban culture and class than it did white people specifically. Portlandia suffers from many of the same problems. It is written by, produced by, and stars white people of a certain class. There are a few non-whites in the ensemble scenes and they may bring in non-white comedians/comediennes down the road, but by and large, Portlandia is a show made for white people by white people. That’s not to say non-whites can’t or don’t watch the show and enjoy it, but the show definitely comes from a specific perspective of urban, white, middle-class/upper-middle-class, liberal culture.

Ultimately the show is a savvy exploration of self-mockery of a subset of lefty culture. Sometimes it’s good to take a moment to laugh at the absurdity of a culture taken to an extreme. It’s a medicine arugula-eating liberals might be happy to take.