The Tyranny of the Resolutionaries

Folks have been writing a lot about New Year's resolutions lately. How to diet. How to exercise. If you can possibly talk about one without the other. This is, in part, why I personally despise New Year's resolutions. They're naively optimistic about the beginning of a new year only to be met with severe disappointment. And since no one seems to keep them, who cares? Mostly, they're the butt of a lot of jokes.
Exhibit A: 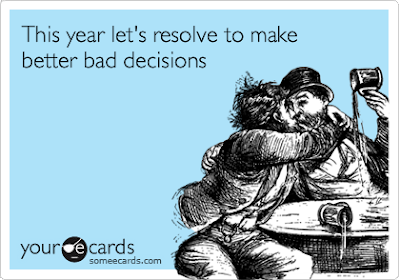 Exhibit B. Exhibit C. You get the idea.
But all those "eat better," "exercise more," and "lose weight" resolutions are one of the most frustrating things for regular gym goers (or even semi-regular gym goers, because let's face it, almost everyone has skipped the gym for happy hour or sleeping in at least a few times). The flood of new faces at the gym that you see for a week or a month at the beginning of January is super irritating. They take up treadmill space. They wander aimlessly around the weight lifting machines. They put those annoying and always-bored trainers to use.
The Washington Post's style section, in a surprising turn of events, wrote an amusing piece about this phenomenon. These so-called "resolutionaries," which is a word I love and wish we had the opportunity to use more than once a year, it turns out, irritate lots of people. The piece is filled with quotes from fitness instructors, gym workers, and regular gym goers, pretty much all of which are wonderful:

"They're banging on the machines," the new guys are, says Mike Sponseller. "It's like watching '2001: A Space Odyssey,' " the scene where the ape uses a bone as a club, only instead of discovering a use for tools, the newbies are trying to figure out how to turn on a StairMaster."
[...]
"January is kind of like our tax season," says Dave Reiseman, a spokesman for Gold's Gym, which has 50 locations in the D.C. metro area, and which can see 100% increases in gym attendance during the first month of the year. "We do a lot of preparation to make sure that new guests" have everything they need for a strong start. Gold's offers an equipment orientation. An eight-week customized health and fitness plan. An infinitely available staff.
[...]
"I think that in their mind, the new people might have this feeling that the gym is supposed to be like [HBO's] 'Oz,' " says Steve Farina, who has been a member of the Gold's Gym in Ballston for five years and witnesses the arrival of the resolutionaries every year. "Like they're in a prison yard," and they have to prove their strength by hulking out, set after set, oblivious to those waiting in line."
[...]
"The spin instructor always asks if anyone is new," says Carmela Clendening, a WSC regular. "But the new people don't raise their hands." Why do they not raise their hands? Someone would help them if they would just raise their hands."

Now, that's not to say that it's not OK to be a newbie at something. If you don't work out regularly, I understand that for some this is as good of a time as any. What's frustrating is when "resolutionaries" clog up the machines for a few weeks and then just disappear. The middle of winter, when it doesn't get light until late and gets dark again early, seems like a very poor time to dedicate oneself to exercise.
In any case, well done, Washington Post.
Posted by Kay Steiger at 9:51 AM