When Women Run for Office 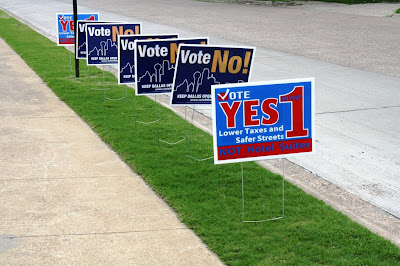 (Flickr/jypsygen)
Via Andrea Grimes, this analysis from the Dallas Morning News of possible candidates to replace Dallas mayor Tome Leppert is fascinating. Can you spot the sexism?

Pros: High name recognition and ability to get votes across the city. Could be dangerous if matched up against the right candidate.

Cons: Considered the enemy of some in the business elite. Ability to run an aggressive campaign could be affected by her new family. Can she raise enough money to compete? [emphasis added]

Pros: As the only announced candidate in the mayor's race, he has an opportunity to get some early momentum.

Cons: He has to build recognition as he is virtually unknown throughout the city.

Pros: Got out the gate early and appears to be in position to get support from various Dallas business leaders. With consultant Carol Reed already on board, Natinsky has access to campaign dollars.

Cons: Could have difficulty getting southern Dallas support. Some business leaders looking for an alternative.

Pros: Long considered to be a viable successor to Leppert. Strong ties to city's business elite and could get votes in the south.

Cons: Does he really want it? Has no campaign experience.

Pros: Has enough money to self-finance his campaign and attract solid consultants. Could be appealing to those looking for a pro-business candidate.

Cons: Still relatively unknown to much of the city. Has to overcome being known as the guy who spent $1 million on an unsuccessful council race.