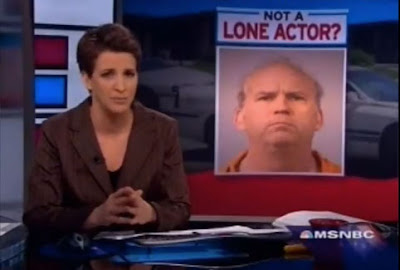 Imagine for a moment that some state legislators were trying to pass legislation would offer special legal protections for terrorists. And that these legislators are Republicans. Oh wait, you don't have to imagine that because that's actually happening in America today.
Thankfully, the South Dakota bill that outlined killing abortion providers as "justifiable homicide" is indefinitely shelved, but there are new bills introduced in two states: Iowa and Nebraska. The fantastic American Independent News Network's Lynda Waddington reports that two bills proposed in Iowa would drastically change both abortion and criminal law for those accused of murdering abortion providers:

Currently, abortion is also settled law in Iowa. But House File 153, sponsored by 28 Republicans, challenges it. Under that bill, the state would be mandated to recognize and protect “life” from the moment of conception until “natural death” with the full force of the law and state and federal constitutions. Essentially, the bill declares that from the moment a male sperm and a female ovum join to create a fertilized egg that a person exists.

House File 7, which has been sponsored by 29 GOP House members, seeks to expand state law regarding use of reasonable force, including deadly force. Current state laws provide that citizens are not required to retreat from their dwelling or place of business if they or a third party are threatened. The proposal would significantly expand this to state that citizens are not required to retreat from “any place at which the person has a right to be present,” and that in such instances, the citizen has the right to use reasonable force, including deadly force, to protect himself or a third party from serious injury or death or to prevent the commission of a forcible felony.

And Nick Baumann and Daniel Schulman at Mother Jones report that similar steps to protect those who kill abortion providers are being taken by Nebraska legislators:

The legislation, LB 232, was introduced by state Sen. Mark Christensen, a devout Christian and die-hard abortion foe who is opposed to the prodedure even in the case of rape. Unlike its South Dakota counterpart, which would have allowed only a pregnant woman, her husband, her parents, or her children to commit "justifiable homicide" in defense of her fetus, the Nebraska bill would apply to any third party.

This means that elected officials in this country are seeking to increase protections -- essentially providing "get out of jail free" cards for terrorists like Scott Roeder who target abortion providers. And, in case you forgot, killing abortion providers is terrorism.
Because abortion is considered divisive, people in America tend to think there are two sides of equal weight to just about every debate surrounding it. But here, we're actually talking about people who, by targeting people who have a certain profession for murder, are intimidating doctors from entering that profession. Yet it's almost certain cable news networks will treat this as yet another "two sides to the abortion debate" issue.
These are actually the two sides: One side that thinks that people who murder people should be tried as murderers, and another side that thinks that murdering people is somehow "justified" based on the kind of work that they do. But killing abortion doctors isn't "justifiable homicide." It's just not.
If pro-choicers were smart, they'd try to relabel each of these bills as the "Terrorists Get Out of Jail Free Act."
Posted by Kay Steiger at 1:44 PM