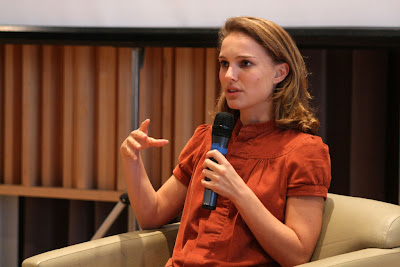 Yesterday Slate ran this long and thoughtful piece by Nathan Heller that speculated on Natalie Portman's rather zig-zaggy career.

Five-foot-three, credentialed at Harvard, and equipped with a smile so startlingly intimate it seems to call for special MPAA mention, Portman cuts a strange path through the field of Hollywood celebrity. It's not because of her biography per se: A lot of movie actors go to fancy schools, and even more wear many hats over the course of their public lives. What sets Portman apart is her puzzling ambitions. Though she's spent nearly 20 years under klieg lights, the career she has been reaching for is a mystery. During a single visit to Cannes a few years back, Portman promoted both Star Wars: Episode III—Revenge of the Sith and Free Zone, a tiny bilingual Amos Gitai production shot in Israel and Jordan on a shoestring budget. Her public taste and personality flickers between a celebrity's glib superficiality and an artist's sedulousness. (Asked once for some books that influenced her in O: The Oprah Magazine, she directed readers to a midcareer Robert Hass poetry collection.) In an industry that rests in large part on the strength of public image, it remains unclear whether Portman is a daughter of the red carpet, striking a pose of highbrow devotion, or a cerebral small-film artist who got dragged into the blockbuster machine.

In fact, this difficulty in pinning down Portman's goals is the key to understanding her career. Although she's often said to carry the anachronistic charms of Audrey Hepburn, Portman is, almost more than anyone else, a star born of this moment. The zigzags and juxtapositions of her work echo her generation's unsettled aspirations; their resonance across the board is crucial to her image both on-screen and in the mainstream eye. Widely driven but impossible to pin down, Portman has brought a new style of ambition into public stardom.

Confusion about where Portman stands in her ambitions isn't, in fact, just a function of her own path. It's an ambiguity extending through the upper strata of her generation. Portman's peers make up a demographic widely perceived as a legion of overdriven dilettantes, a group of young people alternately pushed to wild multispecialization by some unknown inner fire and stunted by an incapacity to choose among those paths. The demographic archetypes are well-known: bleary students working well past midnight at the college newspaper, then rising before dawn for sports; thirtysomething strivers who have changed careers three times trying to find their gold-paved boulevard and forestalled adult life as a result. The trouble here is not ambition (that's a given) but committing to a goal for that drive: Is the point to hit virtuoso's stride in art, in influence, in public service? If many of us feel a closer affinity to Portman than we do to other movie stars, it's not purely because she seems to drink less deeply of the Hollywood well. She is a public figure whose attempts to be all things while committing her soul to none—to draw millions at the box office, to be a fearless small-film artist, to turn her education toward social good—echoes the conflict in our own ambitious drives, our need to keep every iron burning hot for fear of losing our glow. She's replaced an older form of movie-star restlessness (the kind that zoomed toward nothing but the spotlight and that made a mess of lives) with a new one.

It's not that Heller attributes such qualities to Portman's generation, per se. It's more that he seems to miss some analysis. While Portman's over achievement and sporadic goals is certainly a product of her generation (of which I probably classify as a part), it's that she's under the additional pressure of being a woman in this generation.

Much has been made of the high-achieving young woman, who simply wants to be the best and will work extremely hard to achieve it. Courtney Martin wrote a book about how this pressure among teenage girls can result in eating disorders. Liz Funk also interviewed women she classified as "super girls," over-achieving young women who sought to be the best at whatever they could be, for her book on the subject. I don't know a ton about Natalie Portman's personal life since I don't follow her career super closely ("No Strings Attached"? No thank you.), but she pretty neatly fits into this trope.

Though I generally thing this phenomenon is a tad oversold -- and when it does exist it tends to be among a certain class of young women -- there's little doubt that many of today's young women are under astonishing pressure. The pressure is incredible for young women to be smart, beautiful, deferential, organized, and any number of other things. But they're expected to be the best at each of them. At least -- that's the stereotype that's presented, and stereotypes are powerful, too.

Portman seems to have adjusted more or less all right -- what with the Oscar nomination and all -- but it's worth asking why these young women exist and why they feel such pressure. So long as young women are expected to achieve at everything, they will have the "zigzag" careers that Portman does.

And perhaps it's OK that Portman's career is "unfocused." I suspect if Portman were a man, she'd be lauded for exploring new characters and career paths.
Posted by Kay Steiger at 4:59 PM

"I suspect if Portman were a man, she'd be lauded for exploring new characters and career paths."

Totally fair point. I would point to Nic Cage as a example of a male zigzag career that is not lauded and has been sharply criticized by one of his peers Sean Penn.

On the other hand, Jolie and Pitt move back and forth between these two spheres seemingly without consequence.