Why I'll Never Be a Stay-At-Home Girlfriend 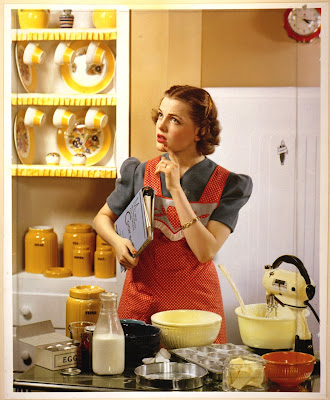 I've been home for 2.5 years. I have a blog that earns some income, plus freelance work, plus a genealogical research business. Every other stay-at-home parent I know also does side work of some sort...and not just the Junior League stuff, but real work.

I can't imagine how I would have survived being home in the Betty Draper era, but I don't have to. I have internet access, and the world has changed. The line between "working mom" and "at-home mom" is much blurrier than it used to be.

Thanks for sharing your experiences. I think you're right. The line is a lot blurrier these days, especially with more flexible work options and permalancing opportunities out there. It's wonderful your blog earns money -- I certainly can't say the same. I do wonder, however how those incomes are compare. Could you afford to do so even without your partner? For me, personally, that's the line. If I could afford to live independently on my freelance income, I would absolutely do it. But if I'm dependent on another person and simply supplement the household income with my freelance work, I'm not sure that's for me.

Oh, I definitely couldn't afford it without a partner. My stay-at-home motherhood started as part of a career change; I had been thinking about leaving HR, and when I had the opportunity to eliminate my own job and get a nice severance package, I took it. My kids were very young, so nobody thought it was strange that I was home with them...which actually provided some (not a lot, but some) protection against all of the people who thought I was crazy for giving up a successful corporate career to become a genealogist. I think I would have taken a lot more crap for making that choice if I'd been the husband instead of the wife.

That said, I'm changing to a career when I think I eventually CAN make a full living without a partner if I have to. In fact, I get up very early and work in the middle of the night to make it happen as fast as I can, because it makes me very uncomfortable to not have a way to support myself if something happens.