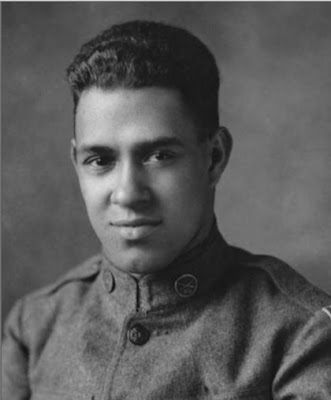 Today I attended a free class put on by the D.C. Humanities Council in collaboration with the D.C. Public Library and the Historical Society of Washington, D.C., that taught you how to research the home in which you live. I discovered my home was designed by Lewis Wentworth Giles, a prolific and prominent African American architect in D.C.

According to the African American Architects: A Biographical Dictionary 1865-1945, which has an excerpt of Giles' biography online, he was born near Richmond, Va. His family moved to D.C. when he was young, and his father became one of the city's first African American police officers in the city. He graduated from Armstrong Technical High School and attended college at the the University of Illinois at Urbana-Champaign, where he studied architecture. But before he could graduate, he was drafted in 1917 to serve in the U.S. Army during World War I. After his dishonorable discharge, he moved back to Washington, D.C., where he apprenticed with Isaiah Truman Hatton. He married in 1920 to Gladys Wheatley, who he met while attending the University of Illinois. Giles was under suspicion for his mentor's death in 1921:

Hatton died May 21 under mysterious circumstances, and Giles as his only employee came under suspicion. He was arrested and spent several nights in jail. No charges were filed and Giles was released three days after his arrest.

After Hatton's death, Giles opened his own architecture firm in a building at 1200 U Street NW, which is now home to the Public Welfare Foundation Inc. and the Washington Legal Clinic for the Homeless. In 1929, he moved his firm to the home he designed and built at 4428 Hunt Place. He and his wife Gladys had two children, Lewis W. Giles, Jr. and Julian Giles. His namesake followed in his footsteps and became an architect and Juilan went on to become a physician. He worked from his home on Hunt Place until his death in 1974.

Lewis' role as a trained architect served him well, since the D.C. government began requiring architects to be professionally trained in 1924. It's difficult to track down exactly how many building Giles designed over the course of his career; one source says "over 1,000" and another says "hundreds of houses, apartments, and churches here and across the city." According to a pamphlet created by the DC Community Heritage Project, "He had a reputation for creating such accurate drawings that he had little trouble getting approval from the city's permit division."

Incidentally, Giles worked with Randolph Dodd to build my apartment building, another highly successful and prolific builder in the city. He build many of Giles' designs, including many on the 1000 block of 49th Street in Deanwood. He also worked often with his brother, Jacob. They likely got a lot of work because their construction was cheap and reliable, according to one pamphlet, "To save money, the Dodds installed windows only in the front and back of the houses. Owners sometimes cut side windows later."

It's all pretty fascinating stuff, and now I learned some more skills in how to research the property databases and old city directories. If you ever get an opportunity to take such a class again, I'd highly recommend taking it.
Posted by Kay Steiger at 1:34 PM