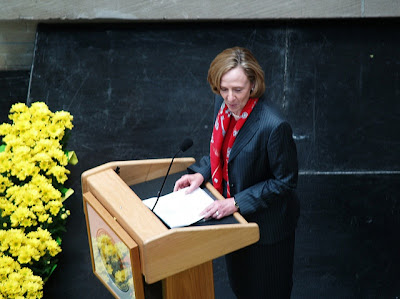 As Monica Potts notes at The American Prospect, there have been a number of stories about women's leadership this week:

No fewer than three news articles this week detail how hard it is for women, both students and professors, at elite campuses. The New York Times reports that MIT, which made an effort some years ago to correct for a lack of female professors on campus, has made gains in recruiting and honoring female professors. But that's created a weird dynamic in which women who win accolades question whether their gender plays a role and feel they have to navigate gender stereotypes on campus. The Daily Beast writes about a study that shows women trail men in campus leadership positions as students, and another Beast article interviews the presidents of UPenn and Brown, both women, about how there's a similar leadership gap at their colleges.

Though the Times story Monica links to leads with the remaining problems of cultural sexism, what I think is interesting about the MIT situation is this: MIT story is that the school found a problem, studied it, and made steps to correct it. And it worked! MIT made significant gains in female representation among professors. It even has a female president, Susan Hockfield. It's a very MIT way of going about it, when you think about it.
Of course, that didn't eliminate all problems of women in academia. As the Times reported, problems remain: there's still a perceived problem that women are unfairly favored (even though MIT took steps to ensure qualified candidates would be hired), and the school still struggles (like all higher ed institutions do) accommodating academic couples.
What this illustrates is that schools really get down to business and recognize that institutional sexism is a problem that needs fixing, there are steps they can take to get there. And recognizing that there's a problem is an important first step.
Posted by Kay Steiger at 1:26 PM

Princeton is also getting some media attention for sexism: http://www.thedailybeast.com/blogs-and-stories/2011-03-21/why-princetons-women-take-second-place-on-campus/