Haifa Zangana on Iraq at WAM! 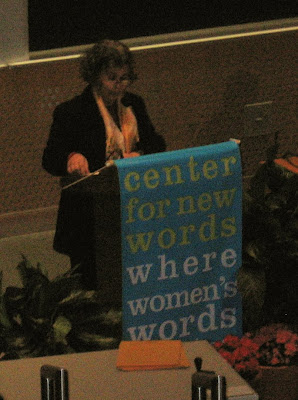 Haifa Zangana was the keynote speaker this morning at WAM! She talked of how women are targeted for rape in today's Iraq. The surge was designed, she said to bring in more troops to "clean" out terrorists. The label of terrorist, sadly is easily applied to anyone.

One of the real tragedies, she says, is the Iraqi refugees that have been displaced by the war. Refugees are dealing with poverty and forced prostitution. Unemployment in Iraq is as high as 60-70 percent among men and 90 percent among women, despite the fact that there are 1 million widows in Iraq today, Zangana said. Women have suffered greatly because of the Iraq war. Before the 2003 invasion, women had a lot of legal protections including equal employment laws, required maternity leave, and nurseries attached to factories. Zangana said she would have never believed that things could be worse for women than under Saddam's regime, but they are.

Sectarian violence has been inflamed by the Iraq invasion. What they are creating in Iraq, she says, is armed terrorist groups. Politically we have a "puppet government." Outside the Green Zone, she says, the government doesn't have much respect or power. On the streets, democracy is a joke. Mothers will say, '"Shut up, or I'll call democracy.' That's all that's left of democracy."

One particular story Zangana told was of a hospital -- desperately needed in Iraq -- has gone unfinished for years. Finally, last year, the American contractors called work on the hospital finished, despite the fact that the building is nowhere near complete. This is eerily representative of the state of Iraq today. There seems to be no clear way to "complete" the work that Bush started on Iraq. If we cannot even successfully build hospitals for the people of Iraq, how can we possibly hope to build a functioning democracy?
Posted by Kay Steiger at 10:09 AM