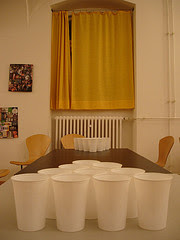 The University of Florida, named the number-one party school in the country by The Princeton Review, is about to ban drinking games, according to an article published today in Inside Higher Ed. The school’s administrators are banning “‘excessive rapid consumption’ of alcohol. The policy specifically bars ‘drinking games,’ as well as ‘alcohol luges,’ which are carved ice blocks that serve as frozen pathways for liquor shots.”

They’re banning drinking games and ice luges? How will the frat houses ever survive? Apparently UF isn’t alone. IHE reports similar bans that have already been enacted at the University of Pennsylvania, Yale University, the University of Massachusetts at Amherst, and Tufts University. It’s hard to say how they’ll effectively enforce the bans, or if they’ll just be slapped on top of other party-busting, underage drinking charges.

The IHE quote from the World Series of Beer Pong site’s co-founder Bill Gaines is pretty hilarious: “You can sit there and watch a church service in college and drink every time they say ‘God,’” he said. “Do you blame God?”

Have you seen the new iPhone app for beer pong? You can find it at Beer Pong Leagues