Deployed Troops Give to Obama Six Times as Much as McCain

This seems rather significant:

According to an analysis of campaign contributions by the nonpartisan Center for Responsive Politics, Democrat Barack Obama has received nearly six times as much money from troops deployed overseas at the time of their contributions than has Republican John McCain, and the fiercely anti-war Ron Paul, though he suspended his campaign for the Republican nomination months ago, has received more than four times McCain's haul. Despite McCain's status as a decorated veteran and a historically Republican bent among the military, members of the armed services overall -- whether stationed overseas or at home -- are also favoring Obama with their campaign contributions in 2008, by a $55,000 margin. Although 59 percent of federal contributions by military personnel has gone to Republicans this cycle, of money from the military to the presumed presidential nominees, 57 percent has gone to Obama. 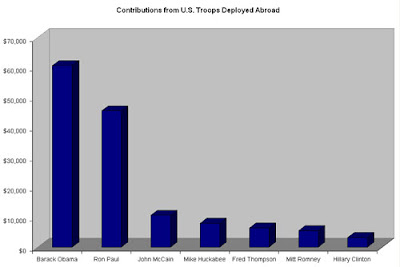 Information for the graph courtesy of Opensecrets.org. Designed by yours truly.
Posted by Kay Steiger at 12:32 PM