Time Warp Wives: The Way They Never Were 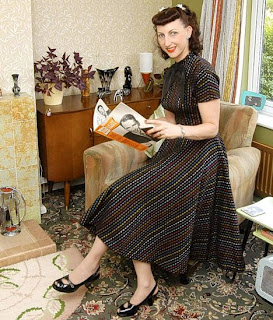 This article in the Daily Mail about a TV show called "Time Warp Wives" that tries to demonstrate that the best marriages were the ones in the 1930s, '40s, and '50s. They all live in period homes with the male breadwinner model. What's interesting about something like this after reading Stephanie Coontz's Marriage, a History is that I remember that the male breadwinner model, which really boomed in the late 1940s and '50s, was simply never replicated in any other period of history. And in all practicality, the women that had male breadwinner families were at least middle class. The model emerged from a very unique series of circumstances: post-war economy, the rise of the love marriage, the relatively low cost of basic goods, and the real stagnation of women's wages. Poor women simply couldn't afford the luxury of staying at home.

But probably the weirdest thing about this show is the degree of fetishization of the male breadwinner model. Overall, people were much less happy with such marriages. It's not as if women as a whole just decided they no longer desired careers or a life outside the home -- women still desired these things but didn't have an option for obtaining them. It's true that some women were genuinely happy with these circumstances, but women aren't a monolithic group. Plenty felt deeply depressed thanks to a severe lack of outside goals and social interaction.

The show is nothing more than costuming and acting. It's no different than if someone decided they wanted to live in the Renaissance times on television or really any other given period in history. It doesn't really demonstrate anything about marriage today except that some people really get a kick out of dressing up in period costumes and pretending to live in a different era. If you ask me, it's all a little Truman Show.
Posted by Kay Steiger at 4:02 PM