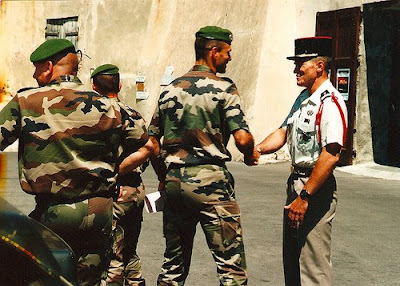 Bob Mackey had a great post over at HuffPo on allowing immigrants, illegal or otherwise, to serve in the military to gain citizenship:

Currently, there is an expedited process for naturalization of veterans and serving military personnel, under INA Section 328 and 329 (328 is the peacetime service exemption, 329 is the wartime service exemption). In general, if an immigrant serves honorably in wartime, even for a single day, they are allowed to apply for citizenship. While this does greatly speed the process, it is not enough. Service itself should bestow citizenship, not "moral character," "English proficiency" and "Knowledge of Civics" tests. Three years of honorable service in peacetime and any service in wartime should result in automatic citizenship for both the service member and their immediate families. Combat wounded and medically discharged personnel should have the same automatic citizenship.

It's worth reading the whole post to learn about a fantastic soldier who Mackey served alongside a soldier named Raul. Mackey never asked if his citizenship papers were legal or not. In the military, what usually matters is if you can do the job you are assigned to do. Raul was a valuable soldier, so it didn't much matter if his documentation was legitimate or not.

What Mackey has touched on is something that's become alarmingly clear lately given the attention on "don't ask, don't tell," the needs of the increasing number of women in the armed services, and the fairly recent decisions to issue criminal waivers: the armed services is relatively slow to change and isn't easily adapting to its changing demographics.

Mackey makes excellent points about how other countries for years have used foreign nationals to serve proudly in the military to gain citizenship. And increasingly, as we fight more wars abroad, the presence of those in the military with the knowledge to speak other languages and understand other cultures is invaluable:

France, through its Foreign Legion, has long allowed foreigners to gain citizenship with service. There is no logical reason why the United States cannot do the same. Not just Latino immigrants should be recruited. Enlist those from the Middle East, especially Iraq and Afghanistan, who have already served alongside U.S. troops. Their knowledge of the culture, sensitivity and regional expertise to the U.S. military would be invaluable. Linguists who are native speakers, civil affairs officers who understand exact tribal and local needs and norms would be priceless.

This has become the main opposition to "don't ask, don't tell," since more and more Arabic speakers are discharged from the military for being gay.

Hopefully the Department of Defense will stop dragging it's feet and begin to take a more comprehensive look at how the armed services need to change their enlistment policies to create a better and more comprehensive force.
Posted by Kay Steiger at 10:45 AM