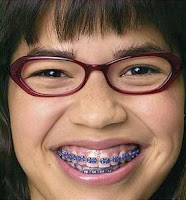 I finally managed to get around to watching my DVRed Ugly Betty season premiere. (Spoilers to follow.) Last season they ended it with Betty's simultaneous romances: Henry, who fathered a baby with his ex-girlfriend and lives across the country, offered a marriage proposal, and Gio, sandwich shop owner, offered up a months-long trip to Europe together. The writers made a pretty unconventional move for a show with an audience as girly as Ugly Betty's: she rejected both offers and decided to stay single because she has so much to experience still in life, including breaking out of assistantship.

But immediately after making an awesome feminist choice like choosing to live her own life and not follow men, she makes a series of really stupid mistakes. First, in an attempt to brandish independence, she foolishly commits to renting an apartment in Manhattan without looking at it first. Aside from the fact that the apartment is ridiculously large for a studio in Manhattan, it is, of course, leaky and in shambles. Second, she returns to work to find that her boss has been assigned to run a Maxim-esque magazine called Player. Instead of calling her sexist coworkers on their obnoxious behavior, she offers up a tense smile and puts up with it. Finally, in an attempt to save her well-meaning but somewhat inept boss, she hops on a motorcycle to save the day. Riding a motorcycle when you don't know how is ridiculously stupid and dangerous.

I get that Ugly Betty's thing is that it's supposed to be filled with caricatures and over-the-top (some of the best of them are Marc and Amanda, who barely made an appearance in this episode), but this just seems more than silly. The best past moments of the show were when we could really identify with Betty's hopes and dreams through her odd color parings. And the satirization of the women's magazine industry (complete with eating disorders) was sometimes spot-on. But if they don't start bringing the show back to its roots with a combination of lovable corniness and homages to Spanish-language TV novellas and a little less American-style comedic plotlines, we won't be seeing any more of Ugly Betty.
Posted by Kay Steiger at 1:06 PM