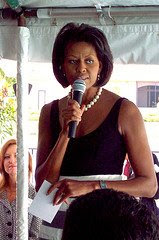 Rebecca Traister has a good look in Salon at the public’s perception of Michelle Obama as First Lady. The media is already eager to paint her as “the mother of young children” whose primary responsibility is to settle her family into their new role as the First Family. But Traister deftly notes the tension that’s hiding under the surface.

When he launched his congressional run, Barack writes, “Michelle put up no pretense of being happy with the decision. My failure to clean up the kitchen suddenly became less endearing. Leaning down to kiss Michelle good-bye in the morning, all I would get was a peck on the cheek. By the time Sasha was born … my wife’s anger toward me seemed barely contained.”

Barack continues, “No matter how liberated I liked to see myself as — no matter how much I told myself that Michelle and I were equal partners, and that her dreams and ambitions were as important as my own — the fact was that when children showed up, it was Michelle and not I who was expected to make the necessary adjustments. Sure, I helped, but it was always on my terms, on my schedule. Meanwhile, she was the one who had to put her career on hold.”

To me this signals the struggle that working women with families eventually have to face. When career women’s husbands are also ambitious, someone has to take the back seat and women are the ones that often end up doing so. We’re kidding ourselves if we think that Michelle, who until Barack’s presidential run out-earned her husband, isn’t a little sad that her public persona is expected by most to be domestic, demure, and polite. The First Lady’s primary occupation is wife by definition.

Aside from the First-Lady-ain’t-no-office argument that Matt Zeitlin put forth, people are more than uncomfortable with the notion of a First Lady flexing her muscles. I would actually disagree with Matt, Laura Bush is only slightly less passive than her mother-in-law. Granted, Hillary Clinton probably took the push for public policy farther than most are comfortable with, but there’s always room for negotiation in this role that hasn’t been defined as active except by Eleanor Roosevelt and Clinton.

There’s no question that presidents have always called on non-elected officials for advice and help. JFK’s relationship with Bobby is a great example. It’s unseemly for wives of presidents to have an official capacity the way Bobby did, so instead they’re expected to plan outfits for inaugural balls. As long as we view couples as a balance–one’s ambitions must take the back seat while the other is enjoying success–we will continue to see the underlying tension that Michelle is living with today.