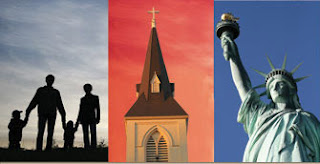 The Family Research Council, the conservative organization that pushes a hetronormative, anti-abortion agenda, released a study yesterday purporting the claim that children of “both biological parents” that attend church on a weekly basis are less likely to repeat a grade. Wow. There are so many things wrong with this that I don’t even know where to start.

Although the report claims that “controlling for all factors” like “family income and poverty, low parent education levels, and race and ethnicity.” But I don’t quite buy it. After all, if you’re in a two-parent household, by nature you are more likely to have about double the household income you’d have in a single-parent household — especially if your in the household of a single mother. Furthermore, families that attend church on a weekly basis are just more likely to be the kinds of parents that are invested in a child’s education, since they are more affluent, more likely to provide the kind of structures that would enable that, and so on. (Interestingly enough, although the press release billed the study as supporting “biological parents” the actual study lumps biological parents in with adopted parents. Presumably they didn’t mean to include gay parents in those adopted parents.)

They also measured behavioral problems in terms of “repeating a grade” and “children whose parents were contacted by school” about behavioral problems. As if these are the only factors that go into a child’s health and well-being. What such factors really measure is discipline, not necessarily overall happiness or achievement in a child.

But here’s the thing. Even assuming all these things are true — that “intact” families that attend church on a weekly basis have more disciplined children — the study seems to point to the idea that people have a choice about the kind of family they end up in. That’s the part I find so horrifying and insulting. Life is a bit unpredictable. You never know when a marriage might not work out or you become widowed. Some people get pregnant accidentally and choose to carry the pregnancy to term (something the Family Research Council strongly supports) but your partner may not stick around to see that child grow up.

Ultimately we don’t get a lot of choice about our family situations in life. Instead of pointing out how awesome two-parent households that attend church are, maybe instead we should look at how to support single parents so that their children’s achievements can match those of the families that don’t seem to need the help.

wouldn't that depend on the denomination though?