Economy Down, Condom Sales Up 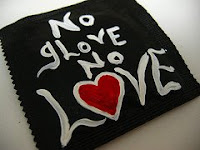 One of my favorite things to blog about is condoms. I haven't had the opportunity in a while, but yesterday's news story about how condom sales are up lately. Some suspect it may be that it's because we're in a depression and people are trying to be extra careful about not getting pregnant when they can't afford a(nother) pregnancy. Historically this isn't such an unusual trend. Last year I read Stephanie Coontz's Marriage, a History: How Love Conquered Marriage

and she talked about how marriage and fertility rates dropped dramatically during the Great Depression in the 1920s and 30s -- and that was before they had birth control pills.

Photo by Flickr user by piperkinsvater.
Posted by Kay Steiger at 9:49 AM