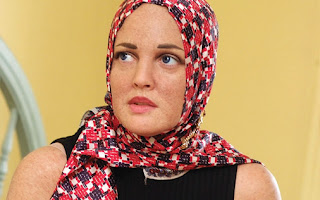 This weekend I had the chance to watch HBO's version of Grey Gardens, a film adaptation of a play adapted from a documentary with a similar titile. It sounds like a premise for disaster, but it was actually a really well-executed film, with stellar acting by both Drew Berrymore and Jessica Lange. I was also stoked to see Big Love's Jeanne Tripplehorn as Jackie Kennedy Onassis. (Spoilers to follow.)

The story is about eccentric relatives of Jackie O's, both named Edith Bouvier Beale. Jackie's aunt and cousin were living on a decrepit estate in Long Island. Because they were entirely dependent on the mother's ex-husband, who left most of his money to his second wife. Eventually the trust runs out, and they live in poverty, never leaving the manor known as Grey Gardens. Eventually a documentary crew comes to record them, which is how the story has lived on.

It was great to see two female actresses take the lead, playing characters that actually age. Still, they're characters with their own problems. Complicated, yes, but also entirely dependent on others. First they were dependent on Big Edith's ex-husband. When the trust ran out, they were dependent on the kindness of Jackie O for the basic necessities of trash removal and food. There are also pitiful moments where Big Edith affects an accent when answering the phone to give the impression servants are still around. Little Edith, or Edie, despite constant pressure to marry, refused to do so, instead engaging in an affair with a married man, played one of the Baldwins. Her hair began to fall out, according to an account in New York magazine thanks to a stress-related illness, in her early twenties. Even after losing her hair, and after her mother died when she was well into her middle age, she still performed in nightclubs, although she always wears scarves as head coverings.

The strength of this film had more to do with the relationship between mother and daughter than anything else. To some degree, they each blame one another for their lot in life. But they are fiercely devoted to each other, remaining by one another's side even as health inspectors threaten to condemn the house. Seeing this adaptation makes me want to see the original documenatary.
Posted by Kay Steiger at 11:30 AM

The HBO film, starring Drew Barrymore and Jessica Lang is certainly a perfect tribute to both the original documentary and these two wonderful woman.
I was told right after filming of the HBO film wrapped up in the fall of 2007, that I would be blown away at the last scene, where Edie sings Tea For Two at Reno Sweeny, and I was ! I had supplied the film company with the only recording in existence of Edie singing the tune, only this wasn't from her actual performance at the club, but rather her singing it just for me at one of my many visits to Grey Gardens, more than 30 years ago. Drew sang it exactly, phrase for phrase as I have it on tape. Edie and I actually met that night at Reno Sweeny, and my relationship with Grey Gardens has now spanned over 3 decades. For our complete review, check out our blog at MyGreyGardens.com (HBO film review by Robb Brawn & Lee Arboreen), and be sure to check our Youtube video uploaded 4/18/09 the same day as the HBO film release. Click
GREY GARDENS PROMO to view the video