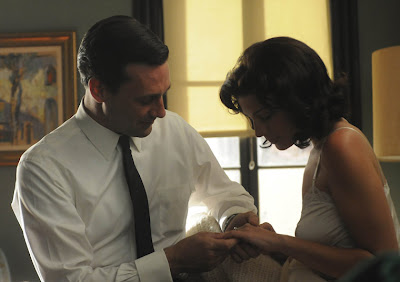 People have a lot to say about Mad Men's season finale:
Arts Beat/NYTimes: Matthew Weiner Closes the Books on Season 4 of ‘Mad Men’ - Interview with Mad Men's creator.
RH Reality Check: Mad Men and the Abortion That Was (n't) - Or I guess it was.
The Awl: Footnotes of Mad Men: Full of Demands, Empty of Offerings - Huh, Life magazine did a spread of heroin addicts in 1965.
Slate: Mr. Draper's Wild Ride - Four reasons for the engagement.
Ned Resnikoff: What the hell is Don Draper’s problem? - What, indeed
Pandagon: Mad Men Not-Tuesday: “Because WTF” Edition - Exactly.
Though I don't typically do "Mad Men" blogging, I have a few thoughts on this finale. Like Amanda Marcotte, I think this episode was one of my least favorite thus far and seemed pretty thrown together. (Spoilers ahead, obviously.)
First I'm with Sarah Seltzer at RH Reality Check in that I thought for sure that hinting around that Joan didn't actually have an abortion was kind of disappointing. Not because I don't think women are allowed to change their minds and carry on with inconvenient and/or difficult pregnancies, but because Joan always struck me as more practical than sentimental. Especially that she's previously had abortions, it makes little sense that she would decide to carry on with this one.
After all, she'd already told Roger that her pregnancy is the result of their night together. What's more, this storyline is fitting into an overall trend of women in various stories (i.e. pretty much everything that Katherine Heigl has starred in) toward getting knocked up under really terrible circumstances and then carrying through with the pregnancy anyway.
What's disturbing about this one is that this is the third such pregnancy on the show (remember Peggy's lovechild with Pete and the third Draper child?).
Secondly, the plot with Don deciding to marry his secretary was disappointing for a number of reasons. Initially I thought this season would be about Don's introspective exploration. After all, he'd begun to realize his drinking was getting out of control and his body wasn't in as good of shape as it used to be (thus the swimming at the Y).
So the conclusion that Don has decided to cop out of his reasonably adult relationship with Faye and instead marry his secretary is a pretty grim one. When I heard an interview with Jon Hamm on Fresh Air last month, he insisted that during a conversation with the show's creator Matthew Weiner, he learned that this season was about consequences. "Actions have consequences," Hamm said during the interview.
While that certainly seemed true of the first part of this season for Don's character, the end result is something much darker -- that no matter how much those consequences come back to bite us in the ass, we get trapped in our same horrible cycles. This point is hammered home when Betty is in the kitchen, ready to throw herself at Don again because her little divorce happily ever after plan didn't work out as she thought it would.
Now that we know that, there seems little that can be done with Don as a character. Perhaps then that will mean that Peggy and Joan will get a little more story next season. God, I hope so.
Posted by Kay Steiger at 1:40 PM

I do look forward to seeing how she balances essentially single motherhood with her job in a time when that was less common than it is now.

For me, the best part of that episode was at the end, when Peggy and Joan were sitting together and talking. It's nice to see them finally understanding that they need to be on the same team if they're going to be successful (and sane) in this environment.

I agree that the best scene was between Joan and Peggy near the end of the show. Here's hoping that they'll focus more on those two characters next season.