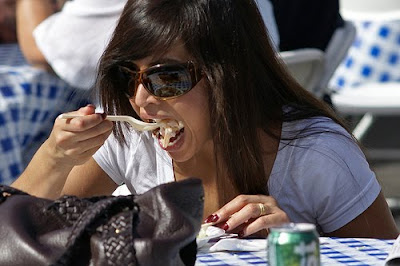 (Flickr/rbrucemontgomery)
Over at Serious Eats, Hannah Smith-Drelich writes about an experience she had with a food photographer at a meatball event (which sound delicious):

As soon as I turned away from Giada to consume her relatively unattractive meatball, a guy with a very large camera appeared. Startled but admittedly flattered, I smiled and held up my plate, pretending I was a venerable guest instead of a recent college grad with a lucky press pass. He took a picture and frowned at the result on his camera screen.
"Can you take a bite?" he asked, leering closer behind his apparatus. Without thinking I complied, closing my eyes to avoid looking at him. The flash went off with my eyes shut, fork in mouth, looking for all I know like a wannabe Nigella caught in a moment of oral pleasure.

Of course, it's impossible to tell if all or even most of food photos that include women are the ones that position women with their mouths open. But Smith-Drelich need look no further than much of advertising photography generally, which depicts women in sexual ways so often it has become a tired old stereotype for feminists to argue against such depictions. Just take a look at the clothing websites Urban Outfitters or the probably soon-to-be-defunct American Apparel to know that the photographer wants you to think sex when you see the model. Even looking at some of the photos that come out of reality television's America's Next Top Model show the contestants in provocative photos.
Still, food photography probably thinks of itself as more sophisticated than fashion or advertising photos. But the idea that women are there to be sexy is pervasive. It's hard for photographers -- especially ones that are looking for an "action" shot -- to negate all of the sexualized images they've seen held up as "good" photos over their lifetimes.
Posted by Kay Steiger at 2:57 PM