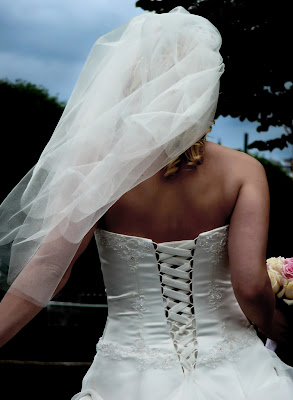 (Flickr/DanielaNob)
Time and Pew did a poll together they released today asking if marriage is obsolete. According to poll results, nearly 39 percent of Americans think so. As I wrote a while back, a related Pew study showed that the under-30 crowd was less married than it used to be. Today, the Time/Pew poll shows that "college graduates are now far more likely to marry (64%) than those with no higher education (48%)."
The Time story that relates the poll goes on to say that "the richer and more educated you are, the more likely you are to marry, or to be married — or, conversely, if you're married, you're more likely to be well off."
The idea of tying marriage to wealth isn't that surprising when you look at the wedding industry. Rebecca Mead, New Yorker writer, noted that back in 2003, the average cost of a wedding was $22,000. TheKnot.com, which has made itself an expert on the subject, says that the cost of a wedding is now is $27,800, but that "weddings cost more in large urban areas." (Keep in mind that you could buy a brand-new Prius for less that that.)
As weddings become more status-oriented and more costly, it makes sense that the less educated -- and therefore the less financially well off -- become less likely to see marriage as accessible to them. This has roughly been my problem with weddings all along, although I suppose I haven't been particularly articulate about it until now. If the standard for weddings becomes a Vera Wang dress, an ornate venue, and freshly imported flowers -- all amounting to that "one perfect day" -- then marriage itself begins to be viewed as an institution for those who can afford all those things.
Of course, not every couple has to do that, and many don't. Lots of couples elope at the court house and have a low-key celebration later on. But the trouble is that there aren't many options for folks that want something in between -- or at least, the wedding industry leaves you with the distinct impression that there isn't such an option. Not to mention that the standard wedding comes with plenty of sexist traditions, from the bachelor/bachelorette parties to the father "giving the bride away" to the bouquet toss for single ladies.
I also have a problem with placing so much emphasis on the wedding itself, as if it were unrelated to marriage. Lots of people seem to think more intensely about the color of their bridesmaid dresses than what constitutes a good long-term partnership. I've talked to so many women who have elaborate plans about their wedding day even when they aren't currently in a partnership. The idea that the wedding doesn't factor the groom/husband into such plans at all -- to the point that the groom's face is fill-in-the-blank in most women's fantasies about that one perfect day -- is more than a little disturbing to me.
Ultimately, in my mind, folks should be contemplating what they want in a lifelong partnership and then, when they meet someone suitable for this arrangement, begin to plan making that partnership legal and official in a way that makes sense for both of them. Oh yeah, and it shouldn't cost tens of thousands of dollars.
Posted by Kay Steiger at 12:49 PM

I work in a community college and many of our students are low-income. I have talked to several students who are in committed relationships, but are delaying marriage until some mythical future date when they can have the big blow out wedding of their dreams. In the meantime, they are losing out on the benefits that go along with marriage, such as being eligible for their partner's health care.