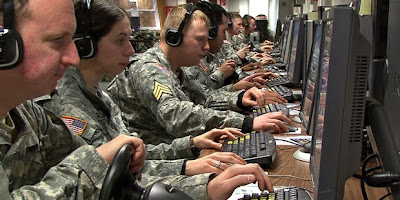 (Flickr/The U.S. Army)
Last Wednesday, at the U.S. Capitol Visitors Center, several veterans gathered to talk about what veterans need in higher education. Their concerns ranged from making credit transfers easier for veterans and active duty members who often attend multiple schools because of deployments, to making sure campuses have dedicated veteran counselors who can help them navigate paperwork for GI Bill benefits. The event was sponsored by the Association of Private Sector Colleges and Universities (APSCU), formerly known as the Career Colleges Association, which represents the interests of many for-profit schools.

Only one veterans' advocacy group was represented on the panel. Tim Embree, legislative associate for the Iraq and Afghanistan Veterans of America (IAVA), commented on the need for colleges to have dedicated offices for veteran students. Other panelists included: Michael Brink, a Republican staffer on the House Committee on Veterans Affairs; Kathy Snead, president of the Servicemembers Opportunity College; Craig Herndon, special assistant to the chancellor of Virginia's Community Colleges; William Hillard, CEO of Anthem College; James Hendrickson, vice president of the Wounded Warriors and Spouses Scholarship Fund for Colorado Technical University; Scott Palumbo DeVry University's National Director of Military Affairs; and Will Sampson, senior vice president and chief information officer of ECB Bankcorp, Inc.

According to data provided by APSCU at the event, "Private sector colleges and universities have a higher percentage of those working with military service than any other segment of postsecondary education." The group used data from the National Center for Education Statistics to conclude that 6.1 percent of students at private sector schools have at least some military experience compared with 3.9 percent at public schools and 4.2 at private non-profit schools. The Chronicle of Higher Education reported in 2008 that "While 6 percent of all college students choose for-profit institutions, 19 percent of students who use GI Bill benefits at the top 500 colleges that serve such students do."

Once the panel discussion had concluded, Harris Miller, the president of APSCU, got up to talk about gainful employment regulations, a set of technical requirements proposed in July by the Department of Education. The proposed regulations would place restrictions on which programs can receive federal funding based on student debt loads and a debt-to-expected-earnings ratio. The purpose is to reduce the number of students with overwhelming student debt and channel federal financial aid to programs that are effective in training people for jobs. Miller insisted that these regulations would cut off access to programs and would "hurt veterans." [Disclosure: The advocacy arm of Campus Progress has submitted comments and testified before the Department of Education in support of the proposed regulations.]

But veterans groups should be very concerned with the issue. As noted, many veterans attend for-profit institutions. And recent investigations, including by the Government Accountability Office, the New York Times, and Dallas TV station WFAA, demonstrate that some for-profit programs engage in deceptive practices and leave many students deeply in debt and without marketable skills.

Bloomberg News recently discovered that Kaplan University sent a collection agency after Keith Melvin, a decorated and disabled veteran, for $4,125 when his federal grants didn't come through. The Bloomberg report shows that Kaplan aggressively recruited Melvin—even telling him he could lose his spot in the class even though Kapaln doesn't limit online enrollment.

According to data from the National Survey of Student Engagement compiled by APSCU, Kaplan University enrolls more than 1,500 students who claim Post-9/11 GI Bill benefits. (University of Phoenix and DeVry University top the list, with 10, 872 and 4,428 students, respectively.)

Brian Hawthorne of the Student Veterans of America, a group that supports veterans in higher education, says his group doesn't have an official position on gainful employment regulations at this time, but, he wrote in an email to Campus Progress, SVA calls "on all schools, for-profits included, to closely examine their policies and programs to ensure that a student veteran has the greatest chance of success." "Online education can be a real asset to a service member or a veteran, as I know myself as I earned my Associates Degree online while in Iraq. Schools should be offering programs that fit the lives of their student veteran population, not pursuing them to increase their Federal Aid and then not supporting them through to graduation. This would not be acceptable at any type of school, not just for-profits."

In fact, as was a prevalent theme on last Wednesday's panel, nearly all higher education instructions offer some of its education in the form of distance-learning classes, whether public, private non-profit, or for-profit. Many for-profit schools also don't just have online classes. Kaplan, the school that was subject of the Bloomberg investigation, offers both online and in-person classes.

For now, prominent national veterans groups are staying away from the debate on gainful employment, which currently remains divided between the companies that own for-profit schools and student advocacy groups like U.S. Public Interest Research Group (PIRG), United States Students Association, and the advocacy arm of Campus Progress. Whether or not gainful employment regulations are put in place could affect a significant number of veterans. And if veterans' organizations speak out now, they could have a powerful impact on the debate.
Cross posted at Campus Progress.
Posted by Kay Steiger at 12:05 PM