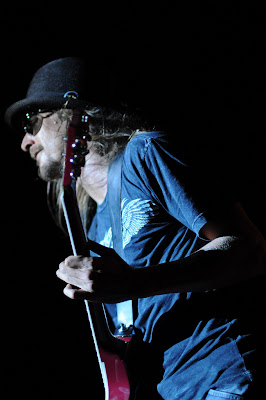 I have some bad news: Tomorrow, Kid Rock — that’s right, the man who made it big with Devil Without a Cause (1998) and Cocky (2001) and offered genius lyrical stylings such as “Bawitdaba da bang a dang diggy diggy diggy said the boogy said up jump the boogy” — will be performing the halftime show for one of the Thanksgiving day football games.

In some ways it makes perfect sense. After all, Rock, born Robert James Ritchie, is from the exurbs of Detroit and he’ll be performing at tomorrow’s game is between the Detroit Lions and the New England Patriots. He’s promoting his recently released album Born Free. The occasion will also promote Rock’s upcoming 40th birthday party, which will be performed at Detroit’s Fox Theatre on Comedy Central on January 17. What’s more, the NFL is no stranger to promoting itself through country stars — Faith Hill and Hank Williams, Jr., have a near-permanent place promoting the Sunday and Monday night games.

Rock has been more on the national radar lately because he also performed at Jon Stewart and Stephen Colbert’s “Rally to Restore Sanity/Keep Fear Alive” — something that could have alienated his more conservative country fans since the rally was set up in opposition to Glenn Beck’s “Rally to Restore Honor.” Rock performed with Sheryl Crow, reminding us of that other time the two had a hit (“Picture” went gold).

But the song he performed at the Stewart/Colbert rally, “Care,” had lyrics “I can’t stop the war, shelter homeless, feed the poor … I can’t change the world and make things fair / The least that I can do is care” that also pissed off some on the left. Rock’s message promoted a rather unenlightened vision — a feeling that things are bad but ultimately that nothing can be done about them.

Rock came to fame in the late-1990s era of popular country, with elements of rap added into the mix. He had a reputation as a bad boy — he married and divorced Playboy model Pamela Anderson in the space of four months. His Rolling Stone covers (1 & 2) portrayed him as something of a white trash phenomenon. (One cover actually teased the story about him with the words “Kid Rock Talks Trash.”) Rock’s lyrics, however, lack some of the legitimacy of those who are actually viewed as rebelling against authority and instead promote a frustrated apathy. “Only God Knows Why,” one of his singles from his 1998 album Devil Without a Cause, presents a character trapped by circumstances and crying out in hopelessness. Even the title of the album suggests rebelling for the sake of rebelling.

The same is reflected in Rock’s lyrics to the single from his latest album. “Born Free” is a mix of anxiety and nostalgia that’s all too often reflected in modern political dialogue, “You can knock me down and watch me bleed / But you can’t keep no chains on me.” In the music video, freedom is represented by Rock driving down the highway in a convertible with longhorns on the grill. His messages are frustrated but unspecific about causes or a path forward.

Sure, we might be in the middle of a ’90s revival, but Rock’s message, something that comes neither from the left or the right, is one that I’m not really interested in revisiting. Here’s hoping we won’t see a Kid Rock comeback.