Pew Research Center has now decided that Twitter is important enough to study on its own! Yet only 8 percent of all internet users—a full 6 percent of the population overall—actually use it.
The following chart was included in its most recent report and I thought it was sort of interesting. Among the findings: women and people of color, particularly Hispanics, are more likely to use Twitter than men and whites, respectively. 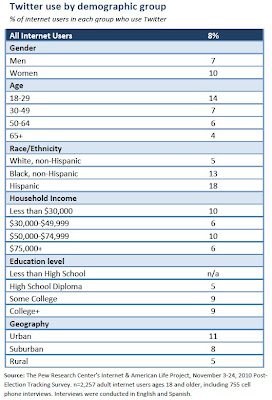 Among the findings: women and people of color, particularly Hispanics, are more likely to use Twitter than men and whites, respectively.

Big difference. See my comment on Yglesias for more on why.

I haven't had an opportunity to read the full Pew report yet, but I doubt they've made this mistake. In the executive summary they are very careful to emphasize that they surveyed internet users.

As you'll note in my first paragraph, this is a survey of folks who already use the internet.