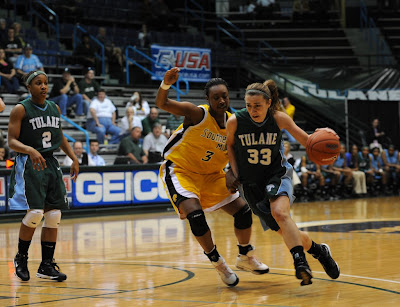 Presented in a blog format, espnW.com will offer fan- and athlete-centric content geared toward female athletes and sports fans aged 18+. The site, supported by a Twitter and Facebook presence, will incorporate posts by top female sports columnists and bloggers, pro athletes, expert contributors and news from a variety of ESPN and non-ESPN news outlets. This 1.0 version of espnW.com will serve as a precursor to a more robust web site with mobile applications and personalized content that will launch in Spring 2011.

If ESPN is trying to cater more to women with its content, it's about damn time. Title IX will have its 40th birthday in 2012. Women now account for 46 percent of NFL fans, which has sent the NFL merchandising team scrambling to make hay of female fans' purchasing power. American Women in Sports Media, founded back in 1988, boasts a membership of "over 600." And the National Sports Foundation, founded by tennis pioneer Billie Jean King, notes that sponsorships of women's sports have more than tripled from 1992 to 2000 to $1 billion and that two in five high school girls play some kind of varsity sport. While women still aren't the majority of fans or athletes, they're a quickly growing demographic in both sports and sports coverage. ESPNW seems aimed both at promoting both women sports writers and professional and college women athletes.
In some ways, I'm excited to see this new product. As a recently renewed sports fan, I've been looking for fan blogs and sports stories on my favorite teams -- but almost all of them have been written by men, with the occasional misogynist joke thrown in for good measure. The biggest fan blogs and professional sports journalism sites tend to be dominated both by male writers and male commentors. It's refreshing to read sports commentary written by women, but what's puzzling to me is why ESPN felt the need to put it on its own site rather than simply promote women within ESPN.com.
Some of the content found on ESPNW is very similar to the kind of content already found on ESPN's main page, like their recaps of last night's NFL and NBA games. Other stories highlight the achievement of women athletes, like Kara Lawson's "Five Big Reasons to Watch Women's Basketball." None of it would -- or should -- look out of place on ESPN's main page.
ESPN is likely following the trends of other websites that have started rolling out female-only websites to varying degrees of success over the last few years: Jezebel is a subset of Gawker, the short-lived DoubleX stand-alone site for Slate, AOL's Lemondrop, and now the Hairpin is a counter (or supplement, depending on how you look at it) to the Awl. Such a move has been criticized by some, including Ann Friedman in The American Prospect, who argued at the time of DoubleX's launch, "When publishers create separate sites dedicated to women or to black people, they are signaling that they don't see a need to have their main site serve these people as core readers."
It's tough to criticize a new product that probably brought jobs to female sports writers in the middle of a tough economy and while newspapers around their country are cutting sports sections down or completely. But I do hope that if ESPNW performs well -- and who knows if it will -- I hope ESPN will take it as a lesson that they should continue hiring women sports writers and highlighting female athletes.
Posted by Kay Steiger at 2:29 PM

I'm excited for ESPNW, but really I'll probably continue to use the regular ESPN website just as much as I do know. On my own blog, I do notice that my sports articles get more comments from men, while my others are pretty even, except fashion posts, which are dominated by female commentators. I guess that's to be expected though..