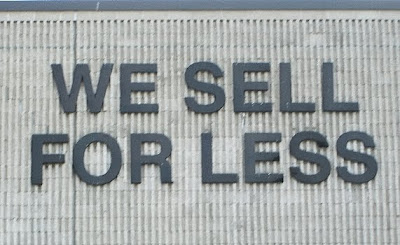 (Flickr/Toban Black)
Today the Supreme Court agreed to hear a case that could have major implications for pay discrimination. The case is Wal-Mart v. Dukes, the near-infamous class-action lawsuit that argued successfully that hundreds of thousands of female employees at Wal-Mart had been paid less than their male peers.
What's interesting about this case is that whether these women were discriminated against isn't the question -- much as it wasn't for Lily Ledbetter when she argued her case before the Supreme Court against Goodyear. Instead, we're starting to see a trend of employers accepting that they are guilty of discriminating against women on pay, but they're managing to find other ways to get out of paying the full price for that discrimination. At stake in Wal-Mart is two main things, which SCOTUSblog summarizes here:

The first question will be whether, under Federal court Rule 23, a lawsuit may seek a money verdict — in this case, a claim for back pay — when the class was created under a provision that limits remedies to corrective court orders, not money. Besides agreeing to hear that, the Court told the parties to file briefs and prepare to argue on a second question — whether the class was a proper one, under Rule 23, when it was cleared to go forward under Rule 23(b)(2). It is unclear whether the Court, if it answered that second question in the negative, would be signaling that the class case might still proceed under a different part of Rule 23 — part (b)(3), which does allow money claims.

It's that second question that legal experts are the most worried about. Wal-Mart is arguing that because this lawsuit includes women at all levels of employment, from management to the lowest level of employees, there's now way their cases can be argued together.
So if Wal-Mart argues this point successfully it's possible this could put an end to class action lawsuits as we know it. The whole idea behind class action lawsuits is that a number of people who have experienced a violation of the law can band together and leverage their power as a group.
If such lawsuits, especially on pay discrimination, are dismissed by the Supreme Court, that could mean that women further lack incentive to argue against discrimination. If each woman has to argue her case against her employee individually, or at least, as a smaller group of employees all at the same level (which, at small companies, can be a group of two or three people), then women will be less likely to be willing to argue their cases in court.
And furthermore, such a decision would ignores the fact that discrimination can be a systemic problem within a company. When women must argue discrimination in individual cases instead of as a group, that means companies would have little reason to address widespread problems of discrimination.
SCOTUSblog says the case is likely to be heard in March or April.
Posted by Kay Steiger at 2:40 PM