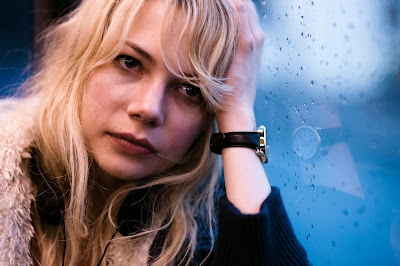 I watched Blue Valentine this weekend. (Spoilers ahead, though the film isn't so much driven by plot.) Though I kept hearing the film was so depressing since it was about the end of a heterosexual relationship, I didn't really come out of it feeling that devastated.

The film is ultimately about people more or less trapped by circumstances. Both of the main characters, played by Ryan Gosling and Michelle Williams, are working class people who have potential. Williams' character, Cindy, says she'd really love to go to medical school and be a doctor. Gosling's character is more content with his life in manual labor though apparently has some skill as a musician and an artist.

We see the characters in two parallel story lines, one in which they are falling in love and the other in which they are falling out of love. When the two meet, Cindy is in the midst of a breakup with another boyfriend who we witness having sex with her and coming in her without her consent. The act ultimately destroys her relationship with the previous boyfriend. She then meets Gosling's character, and the beginning of their relationship coincides with the messy end of another. The scenes in which the two characters fall asleep are touching, making the contrast with the second storyline a sharp one.

It seems clear throughout the film that Williams isn't on birth control in that first storyline. Her partners also don't seem to use condoms. When she discovers she's pregnant, she can't say for sure that Gosling's character is the father. But contraception isn't discussed in the film by any of the characters.

The film then includes a scene in an abortion clinic, in which Williams' character gets to the point of receiving anesthesia and then asks to stop the procedure. We don't know why Williams' character decides she doesn't want an abortion, but the film leads us to believe that it is he pain and discomfort of the procedure that causes her to change her mind. (I'd be interested to hear from women who have undergone the experience to examine how realistic the discomfort is depicted.) Afterward, they decide to stay together and "be a family," as Gosling says, the scene is tragic because we've been watching end of their relationship at the same time in the parallel storyline.

Still, I didn't come away from the movie feeling sad. Their relationship ran a natural course. It is just because of circumstances that they were tied together by a chil, an adorable girl named Frankied. But because it seems that they would each honestly be happier apart than they would be together, and it seems that they ultimately love and care for Frankie.

Would the characters been happier had Williams' character not gotten pregnant? Maybe. It's certainly true that the end of the relationship might not have been as fraught with consideration for a child and they possibly may not have rushed into getting married so quickly. But in the end, these were the choices they made. That's the thing about giving women the choice of having an abortion. She might choose not to have one. Sometimes that's the better choice and sometimes it isn't. It's unclear how we're supposed to feel about Williams' characters choice. Some may come out of the movie thinking so, others may come out of it thinking she made the right one. But ultimately it's important that she's allowed to make that decision.
Posted by Kay Steiger at 3:40 PM

I really feel that Frankie doesnt play much of a part in the destruction of the relationship. She is the reason the main characters stayed together for so long.The characters portrayed by Michelle and Ryan are both very flawed and clues to why are given in the film. Michelle Williams character later on in the film is very abusive to Ryan Goslings character. She is verbally, mentally and physically abusive(when she slaps,punches and scratches her husbands face when he comes to her job drunk comes to mind). The scene with her father berating her mother is one of the clues to this behavior. Ryans character seems oblivious or in denial about the state of the relationship. He seems to be attracted to the brokeness of her character. The scene where he is invited to Michells characters home for dinner and he explains that he hasnt seen his mother since was 10 years old explains why he wanted to be a family with a woman who made very poor choices.