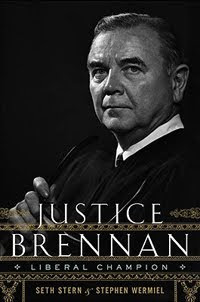 OK, so admittedly over the break I geeked out on Supreme Court stuff. Majorly. I read a tome of a biography on now-deceased Supreme Court Justice William J. Brennan Jr. called Justice Brennan: Liberal Champion

by Seth Stern and Stephen Wermiel. The book itself is an engaging and fascinating read and it made me wish that one day I have the opportunity to write such an interesting and well-written biography of someone admirable.

But Justice Brennan, as admirable as he was -- he was considered moderate when he joined, but eventually became one of the most reliable liberal votes on the Court -- he was by no means perfect. One of the points the authors take pains to describe is that Brennan, despite reliably voting on behalf of the rights of women and minorities, did little to integrate either into his professional or personal life in a meaningful way. He even once declared that he might have to resign if he had to serve on the Court with a women. (When Sandra Day O'Connor joined in 1981, Brennan did not, in fact, resign.)

They even describe during the early 1970s his reluctance to hire female law clerks, including distinguished UCLA law professor Alison Grey. When Brennan again rejected another female candidate on the basis of her sex, it took a letter from Brennan's former law clerk Stephen Barnett to convince Brennan to change his mind. Bennett argued that not only was Brennan surely headed toward a sex discrimination lawsuit, but that his bias was also inconsistent with his own opinions.

Bennett wrote: “your blanket refusal to accept a woman clerk is not just ‘sexist,’ and not just contrary to government policy; it seems to me that it is literally unconstitutional, under the decisions” Brennan had written or joined in. Brennan than hired his first female clerk, Marsha Berzon, who was appointed to the 9th Circuit Court of Appeals under former President Bill Clinton.

Likewise, though Brennan's opinions were key in desegregating schools (he preferred the word "desegregation" to "integration" which a friend who had recently traveled in the South made Southerners think of interracial marriage), his own life was quite segregated. He'd moved out of Newark before a large African American population had arrived, and when he moved to Washington to take his job on he Court, he lived in the very white neighborhood of Georgetown. Though he briefly attended a Catholic church started by African Americans who had been banned from another Catholic church, he stopped attending after a while. Brennan hired his first (and only) African American law clerk during his last term on the Court.

Brennan is probably like many liberals even today, who might advocate for progressive policies but find their own lives quite racially or even gender segregated. Sometimes it helps when someone else holds up a mirror for you.
Posted by Kay Steiger at 10:30 AM