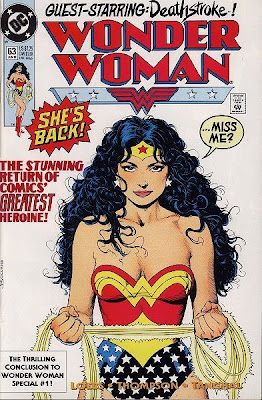 Alyssa Rosenberg writes on the fact that it seems clear we're not going to be getting a Wonder Woman TV show. Alyssa covers many of the practical reasons why such a show might not be good, but I'm still a bit bummed at the news. Truth be told, I haven't read too many of the Wonder Woman comics, and plenty of feminists have mixed feelings about Wonder Woman. (See this piece by Shelby Knox on why Wonder Woman's recent "modernization" isn't such a win for feminists.)

But the reason I'm bummed about the lack of of a Wonder Woman TV show has a lot to do with why it took me so long to come around to comics in the first place: The fact that female characters in comic books tend to be either an afterthought, a supporting character, or -- if she is given her own title -- generally seen as less good than the male superhero giants like Batman, Spider-Man, and Superman.

Wonder Woman, though not a perfect superhero, is the first female one. She also possesses strength that is on par with her male peers. And though her costume is certainly sexy, her powers aren't sexual -- she's intelligent and powerful in her own right.

It's true that the major comic publishers are making more efforts to highlight female characters and run titles with female leads, but it will be a while before those those characters are considered on par with the big male characters -- if they ever are. Television producers have certainly been more willing to produce TV shows that feature male leads (i.e. Smallville) than they have been to experiment with female leads.

And for what it's worth, many girls who read comics enjoy reading stories about male characters, as Okazu noted. But it'd be nice if we didn't have to be second banana to the boys.
Posted by Kay Steiger at 10:05 AM