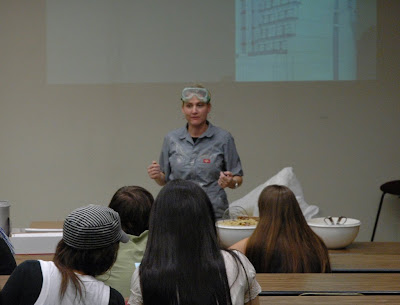 (Flickr/Marshall Astor - Food Pornographer)
Via Inside Higher Ed, Academe is publishing a new study that finds women in academia are routinely given more departmental service duties -- duties that often aren't considered when considering promotions. The study examined 350 faculty members at the University of Massachusetts–Amherst and found:

Although associate professors of both sexes worked similar amounts of time overall—about sixty-four hours a week—the distribution of work time varied considerably. Men spent seven and a half hours more a week on their research than did women. Even if these differences in research time occurred only during semesters, not during summer or holiday breaks, this would mean that men spent in excess of two hundred more hours on their research each year than women. On the other hand, women associate professors taught an hour more each week than men, mentored an additional two hours a week, and spent nearly five hours more a week on service. This translates to women spending roughly 220 more hours on teaching, mentoring, and service over two semesters than men at that rank.

In other words, when it comes to promotion in academia it's research that matters -- and men are getting to spend more time on research than women. In many ways, it's the equivalent of the housework paradox; women spend just enough more time on household duties than men often translating into less time working those extra hours that might get you promoted.
I wish I could say I was surprised, but this study just confirms what I learned anecdotally from women I've interviewed in academia. Women are often assigned to more administrative and teaching duties while their male peers are left to do more research and publish more studies. It will take some serious cultural changes to alter this pattern.
Posted by Kay Steiger at 10:09 AM