Adventures in Entertainment for the Rich 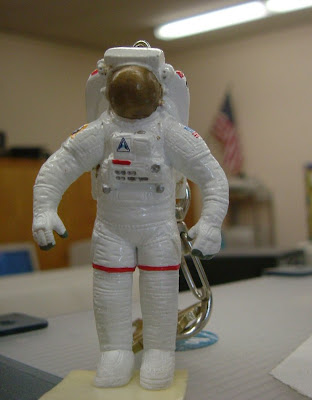 (Flickr/dogwelder)
Ever since funding for (wo)manned space flights became public policy, we knew that space travel would only move forward if private investors wanted it badly enough. Luckily! The New York Times is totally all over this:

If all goes as planned, within a couple of years, tourists will be rocketing into space aboard a Virgin Galactic space plane — paying $200,000 for about four minutes of weightlessness — before coming back down for a landing on a New Mexico runway.

Holy cow! Only $200,000! What a steal! Granted, the Times notes it's "prohibitively expensive ... except for a small slice of the wealthy" but the obvious point is this: Early adaptations of technology are very expensive, and tend to have early adopters among the wealthy. But as technologies get cheaper, they filter to the masses. (Ahem, jet packs.)
Still, Star Trek fans who remember how egalitarian (or you could say utopian) that future world was painted, space travel, at least for now, is for the rich.
Posted by Kay Steiger at 4:51 PM